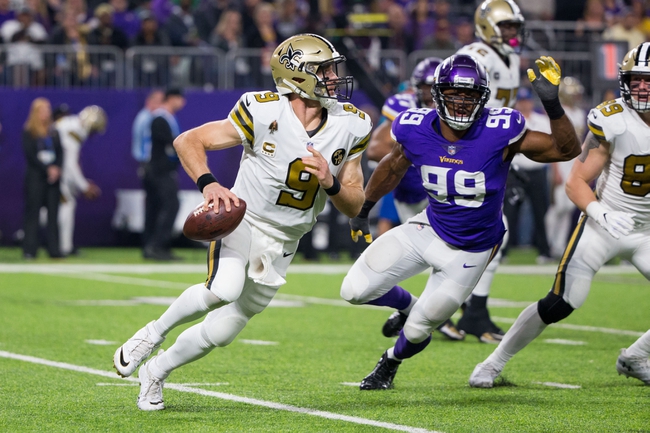 The Minnesota Vikings and the New Orleans Saints meet in NFL action from Mercedes-Benz Superdome on Sunday.

The Vikings enter this Wild Card Round after a 10-6 season. Minnesota finished out the schedule at 2-2 taking out the Lions and Chargers before falling to the Packers and Bears in their last two games.

In the loss to the Bears, Minnesota’s Sean Mannion posted 126 yards with two picks, and Mike Boone added 148 yards and a TD. Alexander Hollins put up two receptions for 46 yards to lead the team there.

Over on the Saints’ side, they went 13-3 during the regular season. New Orleans finished off at 1-3 over their last four games, falling to the 49ers before taking out the Colts, Titans and Panthers.

In the win over the Panthers, New Orleans QB Drew Brees put up 253 yards and three TDs, and Latavius Murray had 61 yards rushing. Tre’Quan Smith posted five receptions for 56 yards and a touchdown there as well.

You can’t fault the Vikings for dialing things back in an essentially meaningless game against the Bears in Week 17, but Minnesota wasn’t exactly dominant in their 2-3 finish. That said, the two losses to playoff teams in that span (the Seahawks and Packers) came by just one TD apiece.

New Orleans looked a little better over their last quartet, pouring in at least 34 points in each of those games. I fell like Minnesota will be able to keep pace for a while, but ultimately I don’t think the Saints will have too many issues covering here; they’re just a great team. I’m going New Orleans.