The Los Angeles Rams will travel to Lumen Field to take on the Seattle Seahawks this Sunday afternoon in NFL action.

The Los Angeles Rams had their 2-game winning streak and dropped to 9-5 on the season after a shocking 23-20 loss to the previous unbeaten New York Jets this past Sunday. Los Angeles struggled on the offensive end in the first half and could not fight all the way back after a Frank Gore 1-yard TD run gave the Jets a 20-3 lead with 8:30 left in the 3rd quarter. Los Angeles outgained New York by a 303-289 margin, however, lost the turnover battle by a 1-0 margin in the loss. Leading the way for the Rams was QB Jared Goff who completed 22 of 34 passes for 209 yards, 2 TD, & 1 INT.

The Seattle Seahawks won their 2nd straight game and improved to 10-4 on the season after defeating the Washington Football Team, 20-15, this past Sunday. Seattle allowed Washington fight back from a 20-3 lead to make it game late, however, the defense came up big late with back-to-back sacks of Dwyane Haskins and was able to close out the game after Washington turned it over on downs with just about a minute left of regulation. Seattle was outgained by Washington by a 353-302 margin, however, did win the turnover battle by a 2-1 margin in the victory. Leading the way for the Seahawks was QB Russell Wilson who completed 18 of 27 passes for 121 yards, 1 TD, & 1 INT while also adding 52 rushing yards.

Seattle picked up a nice win against Washington and come into this game winning 4 of their last 5 games, however, I just haven’t been that impressed by the Seattle offense as of late. You have to imagine that after getting upset by the Jets and allowing Seattle to take the lead in the NFC West, that the Rams are going to have a bit more of focus at the practice week and between the fact that I think the Rams will be able to slow down Russell Wilson and put up some offense against Seattle’s 32nd ranked pass defense, I think the play here is to take Los Angeles and the points. Good Luck! 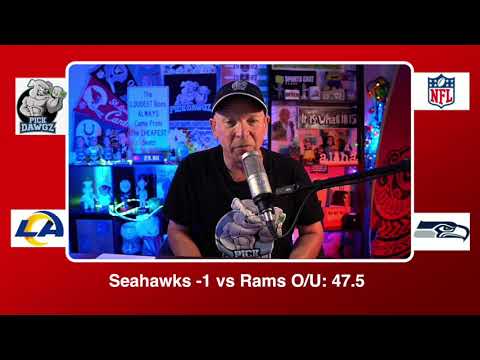