The San Francisco 49ers have dealt with all kinds of injury issues this season and it has led to them sitting with a 5-9 record overall. The 49ers come into this game having lost three games in a row and failed to cover the spread in all three of the games, In each of the last three games the 49ers were the favorites. In the last game against the Cowboys, the offense did manage 33 points but their defense really let them down, giving up 41 points. On the season the 49ers are averaging 23.8 points per game while their defense is giving up 25.1 points. Nick Mullens has been under center for the 49ers and on the year he has thrown for 2,437 yards, 12 touchdowns, and 12 interceptions. Mullens is a dealing with an elbow injury and it’s unclear if he will be able to go. If he can’t go it will be CJ Beathard who will get the start.

On the other side of this matchup is the Arizona Cardinals who are in good shape to make a playoff appearance, but they can’t have a slip up in this game Coming into this game, Arizona sits with an 8-6 record overall and they have won two games in a row. Arizona’s last game against the Philadelphia Eagles the defense was an issue giving up 26 points, but the offense was strong putting up 33 points. Kyler Murray had a big game throwing for 406 yards, three touchdowns, and one interception. Murray also rushed for 29 yards, and one touchdown, On defense this year, Arizona is giving up 23.5 points per game and in this one the defense is going to need to step up.

The Cardinals offense is strong and that is going to continue in this game. I expect the 49ers are going to have no issue running up the score and that will lead to this game going well over the posted total. 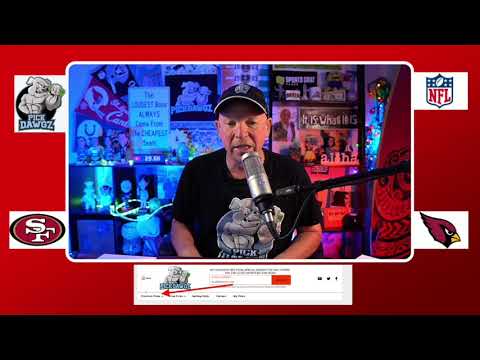