The Miami Dolphins face the Las Vegas Raiders on Saturday, December 26th at Allegiant Stadium for an NFL football matchup.

The Miami Dolphins were able to eliminate Bill Belichick and the New England Patriots in Week 15 of the season with a 22-12 win at home. The Dolphins really needed a win in that game and the defense showed up in a big way. New England was only able to score 11 points and earn 303 total yards in the game. The Dolphins are now 9-5 on the year but still have a lot of work to do in order to make the postseason. The AFC picture is a lot more difficult than the NFC playoff picture, so the Dolphins are in must-win mode for the next two weeks. The Miami Dolphins have scored 25.1 points per game and have earned 339.7 total yards of offense per contest as well. The Dolphins' defense has been the team's best asset, allowing only 18.4 points per game to its opponents.

The Las Vegas Raiders lost to the Los Angeles Chargers by the final score of 30-27 in overtime to virtually eliminate the Raiders from a playoff spot. The Raiders are not officially done, but it is going to take a lot for Las Vegas to find the postseason, and that includes a win in this game. The Raiders are 7-7 on the year and are in second place in the AFC West behind the defending Super Bowl champions in the Chiefs. The Raiders have scored 26.9 points per game and have earned 384.4 total yards of offense per contest as well. The injury status of QB Derek Carr will be something to note for this game as well, as Carr left last week's game with a groin injury. The Raiders allow 30.1 points per game and concede 391.9 total yards of offense per game to their opponents as well.

The Dolphins open as 2.5-point favorites and the total is set at 47. I like the Dolphins to win this game on the road by at least a field goal, as although this is a must-win game for each team, the Dolphins' path to the postseason is far more practical. I think Miami gets the job done. 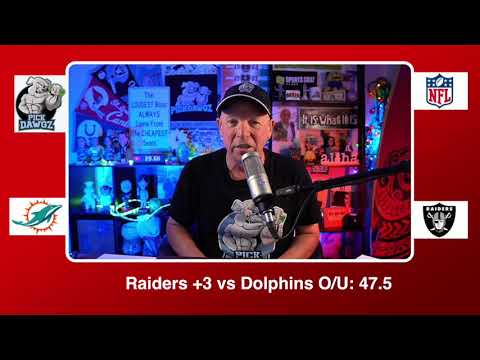