The New Orleans Saints and Minnesota Vikings face off on Christmas Day in a Week 16 NFL showdown at Mercedes-Benz Superdome.

Minnesota looks to be all but eliminated from the playoffs and the biggest problem for this team has been with inconsistency. Just a few weeks ago, Minnesota was in good shape to make the playoffs, but they have lost two straight games. In the last game the defense really let them down giving up 33 points and that led to the loss. Minnesota has a young secondary and there has been inconsistency which has led to the Vikings defense giving up 27.2 points per game. On offense, quarterback Kirk Cousins has actually played pretty well, but he has been under a lot of pressure because of the struggles of the offensive line. Adam Thielen has had a big year but all the eyes have been one rooke Justin Jefferson who has caught 73 passes for 1182 yards and seven touchdowns.

On the other side of this matchup is the New Orleans Saints who have also lost back to back games heading into this one. In the last game against the Chiefs it was a slow start that did them in and even though they made the comeback, they couldn’t get the job done late. Drew Brees admitted after the last game that he wasn’t fully back completing only 44.1 percent of his passes for 234 yards, three touchdowns, and one interception. One other problem for this offense is they will be without Michael Thomas who has been played on the injured reserve. On the season the Saints are averaging 28.4 points per game while their defense is giving up 21.2 points per game. 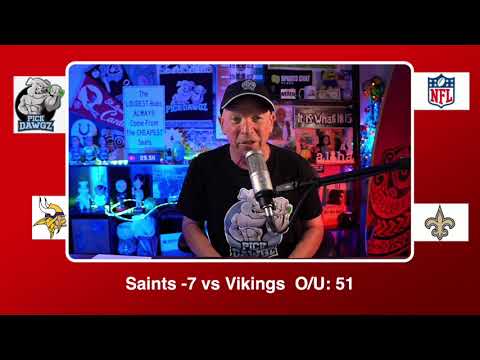