The Chicago Bears face the Minnesota Vikings on Sunday, December 20th at U.S. Bank Stadium for an NFL football matchup.

The Chicago Bears are coming off a 36-7 win over the Houston Texans to keep their small playoff chances alive in Week 14. The Chicago Bears totally dominated in that game, taking an early lead and never looking back. The win snapped a miserably six-game losing streak for the Bears dating back to October 26th. The Bears are now 6-7 and are in third place in the NFC North standings currently, but could leap-frog the Vikings with a win here on the road. The Bears score 21.7 points per game but have scored at least 25 points in their last three games. The Bears earn 339.8 total yards of offense per contest as well. The Bears allow 22.4 points per game and concede 362.9 total yards of offense to their opponents so far this season.

The Minnesota Vikings are coming off a 26-14 loss to the Tampa Bay Buccaneers in Week 14 on the road. Dan Bailey missed three field goals in which was a tough game to watch for the Vikings. The loss for Minnesota snapped a two-game win streak and pushes the Vikings to 6-7 on the year. The Vikings currently own the tie-breaker with the Bears because of their division record so far this season. The Vikings need to win here to realistically keep their playoff hopes alive, and the same goes for the Bears. The Vikings score 25.6 points per game and earn 400.6 total yards of offense per contest as well. The Vikings allow 27.3 points per game and concede 385.5 total yards of offense to their opponents as well.

The Vikings open as 6-point favorites and the total is set at 46.5. I like the Bears to keep this game close and catch a cover on the road. The Bears looked like a completely different team last week, in a very good way. The Vikings have struggled to put teams away and have played in a bunch of close games, whether they be wins or losses. I think six points are too many to pass up here. 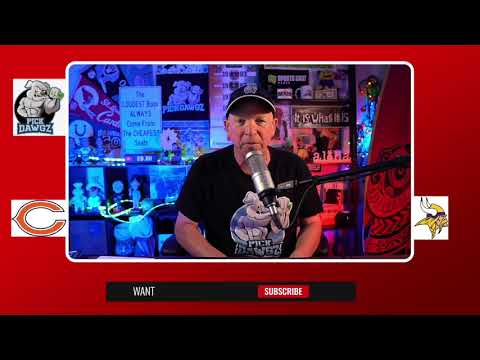