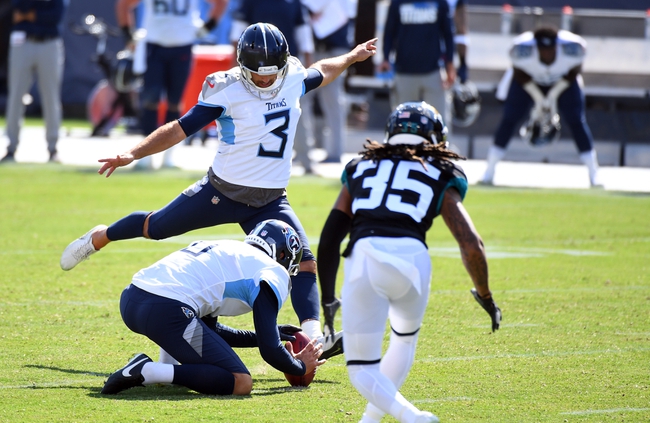 The Tennessee Titans face the Jacksonville Jaguars on Sunday, December 13th at TIAA Bank Field for an NFL football matchup.

The Tennessee Titans are coming off a 41-35 loss to the Cleveland Browns in their last game in Week 13 on December 6th. The Titans trailed in that game by the score of 38-7 at halftime, as Baker Mayfield and the Browns came out swinging. The Titans managed to score 14 points in each the third and fourth quarter to make the game seem closer, but it was all Browns in that contest. The Titans are now 8-4 on the year and only 4-3 at home so far this season. The Titans' loss to Cleveland snapped a two-game winning streak for Tennessee. The Titans are now tied with the Colts at 8-4 in the AFC South standings, but the Titans do own the divisional tie-breaker at the moment. The Titans score 29.9 points per game and earn 400.5 total yards of offense per contest as well. The Titans allow 27.2 points per game and concede 399.7 total yards of offense to their opponents so far this season.

The Jacksonville Jaguars were defeated by the Minnesota Vikings in overtime in Week 13 by the final score of 27-24. The Jags came very close to pulling off the upset over the Vikings but were just short. The Jaguars are now 1-11 on the year and have lost 11 straight games since their week one win over the Colts. An interesting fact regarding the Jaguars is the fact that in four of their last five games, the Jaguars have allowed exactly 27 points to their opponents. The Jaguars score 20.9 points per game and earn 352.6 total yards of offense per contest. Jacksonville has had to use three different starting quarterbacks this season, as the 2020-21 season has not been generous to the Jags. The Jaguars allow 29.3 points per game and concede 422.8 total yards of offense per contest as well.

The Titans are 7.5-point favorites and the total is set at 53.5. Despite being 1-11 on the season, the Jaguars are still 5-6 against the spread. We have seen the Jaguars cover these big spreads like this before, and I am going to take another shot with Jacksonville at home.