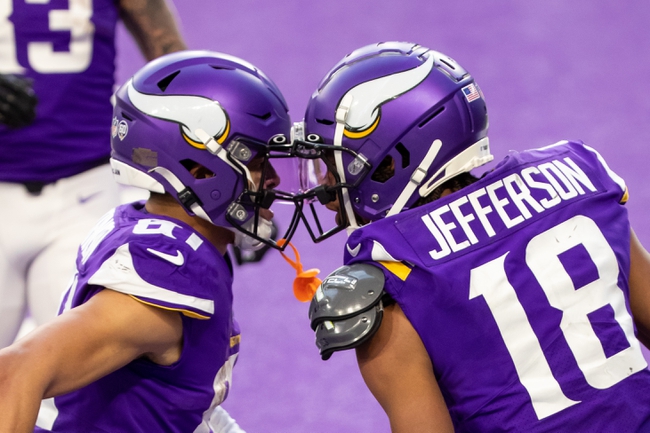 The Minnesota Vikings and Tampa Bay Buccaneers face off on Sunday in a Week 14 NFL showdown at Raymond James Stadium.

The Minnesota Vikings got out to a slow start to the season but they have been winning games as of late, and now they have climbed into the playoff race, although this game is a must win. Coming into this game the Vikings have won five of the last six games, including the last two games against the Panthers and Jaguars.Dalvin Cook has been a stud for the Vikings and on the season he has rushed for 1,250 yards and 13 touchdowns. Adam Thielen and Justin Jefferson are one of the best one two punches in football also. On the season Jefferson has caught 61 passes for 1039 yards and seven touchdowns. On the season the Vikings defense is giving up 27.4 points per game but at key times they have made big steps and that is going to be key in this one. Eric Kendricks got hurt during warmups before the last game and it’s unclear if he’s going to be able to go in this game.

On the side of this matchup is the Tampa Bay Buccaneers who are coming off a bye week heading into this game. The Bucs have found success this year but coming into this game they have lost three of the last four games, but it’s been against tough competition. In the last game against the Chiefs they fell behind early, and even though they made a comeback, they still lost by three points. Tom Brady has been decent for the Bucs, but he has been inconsistent. Over the last two games, Brady has thrown five touchdowns, but he has also thrown four interceptions and against the Vikings defense, he needs to take better care of the ball. On the season the Buccaneers are averaging 28.7 points per game while the defense is giving up 23.3 points per game.

The Vikings are going to keep competitive in this game, and it wouldn’t be shocking if the Vikings were a live dog. I will be laying a few dollars on the Vikings on the money line, but the play is with the Vikings plus the points.