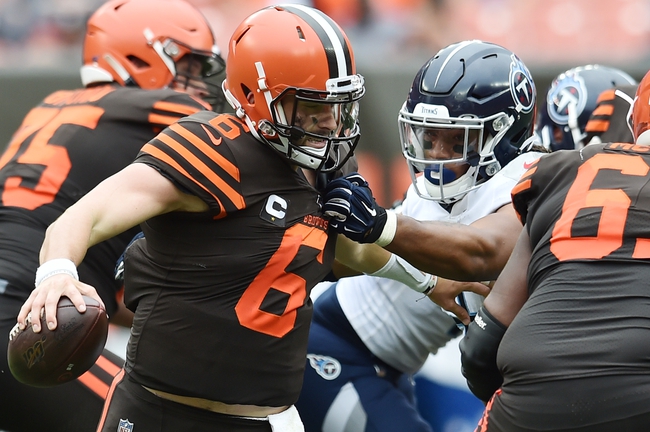 The Cleveland Browns face the Tennessee Titans on Sunday, December 6th at Nissan Stadium for an NFL football matchup.

The Cleveland Browns have clinched an at least .500 season, the first time doing so since 2007. The Browns defeated the Jaguars by the final score of 27-25 on the road in Week 12 to move to 8-3 on the year. The Browns are still in second place in the AFC North, as the Pittsburgh Steelers are still in the lead. The Browns will look to clinch a winning season, but that will not come easy on the road in this one. The Browns score 24.1 points per game and earn 363.9 total yards of offense per contest as well. The Browns' secondary was banged up before last week's game against Jacksonville, and the Jags were able to exploit that. Cleveland will hope to get guys like Ronnie Harrison Jr. back before this game with the Titans, or else the team could struggle defensively again. The Browns allow 26.0 points per game and concede 372.1 total yards of offense to their opposition as well.

The Titans are coming off a big win over their AFC South rivals, the Indianapolis Colts. The Titans defeated the Colts by the final score of 45-26 in yet another offensive shootout. The Titans entered this season with a solid defense on paper and of course, a great running game. Now in Week 13, the Titans' defense has not performed as well as some may have thought, but the offense has certainly performed well above expectations. The Titans are now 8-3 and have sole possession of the AFC South by 1.0 game over the Colts. The Titans score 29.5 points per game and earn 395.9 total yards of offense per contest as well. On defense, the Titans allow 25.9 points per game to their opposition.

The Titans are 5.5-point favorites at home and the total is set at 53. I like the Titans to roll in this game and snap the Browns' three-game win streak. This is a tough spot for Cleveland to be in, as this is the team's second straight road game in the South.