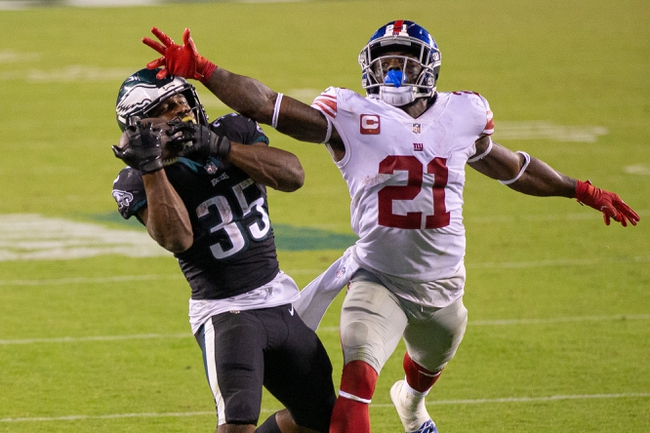 The Philadelphia Eagles will travel to MetLife Stadium to take on the New York Giants this Sunday afternoon in NFL action.

The Philadelphia Eagles won their 2nd straight game and improved to 3-2 on the season after defeating the Dallas Cowboys, 23-9, on November 1st. Philadelphia had trailed Dallas by a 9-7 margin going into halftime, however, the Eagles dominated the Cowboys on both sides of the ball in the 2nd half and had no trouble securing the victory after a 53-yard fumble return by Rodney McLeod gave the Eagles a 21-9 lead with 5:18 left in regulation.  Philadelphia was outgained by Dallas by a 265-222 margin and lost the turnover battle by a 4-2 margin in the victory. Leading the way for the Eagles was WR Travis Fulgham who had 6 receptions for 78 yards & 1 TD.

The New York Giants snapped a 2-game losing streak and improved to 2-7 on the season after defeating the Washington Football Team, 23-20, this past Sunday. The Giants did an outstanding job forcing turnovers and was able to hold off a charge by Washington after going into the 4th quarter with a 23-10 lead. New York was outgained by Washington by a 402-350 margin, however, won the turnover battle by a 5-0 margin in the victory. Leading the way for the Giants was QB Daniel Jones who completed 23 of 34 passes for 212 yards & 1 TD.

Philadelphia is going to get a big boost with Miles Sanders most likely back this week, however, it is hard to back an Eagles team that has had a huge issue with turnovers. New York has been more competitive than their 2-7 record indicates and as I think this game is going to come down to a late FG, I think the play here is to take the Giants and the points. Good Luck!