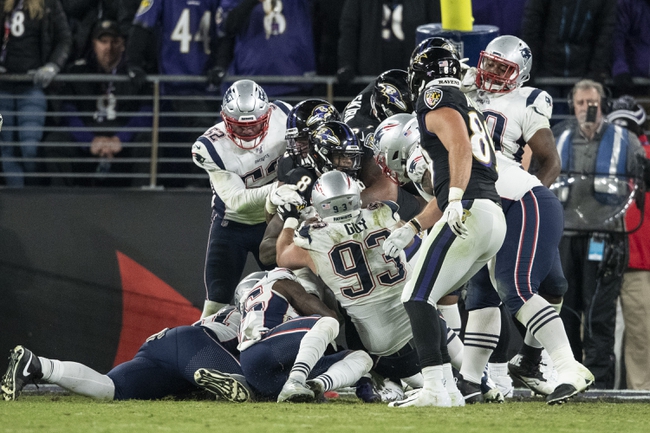 The Baltimore Ravens are coming off a big bounce-back victory over the Indianapolis Colts in Week 9. The Ravens defeated the Colts by the final score of 24-10, improving their record to 6-2 and a perfect 4-0 on the road this season. The Ravens suffered a tough loss to their AFC North rival Pittsburgh Steelers in Week 8, so a road win over a then 5-2 team is big for the team's momentum. The Ravens are now 2.0 games behind the Steelers for first place in the AFC North standings, so the chances of a divisional title are still very much alive. The Ravens score 28.4 points per game and earn 362.3 total yards of offense per contest as well. The Ravens' defense is one of the best in the league currently, allowing only 17.8 points per game to their opposition. The Ravens will look to keep their road record perfect with a win over the Pats.

The New England Patriots were in "must-win mode" in their last game against the abysmal New York Jets. The Patriots somehow and someway squeaked out an ugly victory over the Jets by the final score of 30-27. The Patriots offense woke up in the second half of that game, as after trailing at halftime 20-10, the Pats stormed for 20 second-half points to earn a very important win. The Patriots' kicker, Nick Folk, nailed a 51-yard field goal to win the game for New England, moving its record to 3-5 on the year. A postseason spot is still not likely for the Patriots, but with Bill Belichick as head coach, anything is possible. The Patriots will look to win back-to-back games for the first time this season in a very important spot.

The Ravens open as 7-point favorites on the road and the total is set at 41. I like the Ravens to win this game, but I think the stronger play is on the under. I do not think the Patriots are going to do much on offense against such a tenacious Baltimore D. I think this game stays under the number.