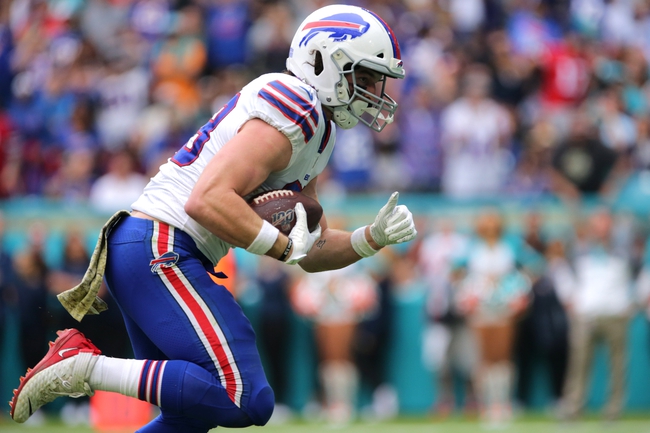 The Seattle Seahawks face the Buffalo Bills on Sunday, November 8th at Bills Stadium for a Week 9 NFL football matchup.

The Seattle Seahawks are coming off a 37-27 win over the San Francisco 49ers in Week 8 of the season. Seattle was dealt its first loss of the season in Week 7 on Sunday Night Football against the Arizona Cardinals, but the Seahawks bounced back in a big way against the 49ers. The Seahawks are now 6-1 on the year and are 1.0 game ahead of the Arizona Cardinals for first place in the NFC West division. The NFC West has shaped into the most competitive and most talented division in the entire NFL, with each team's record being at least .500 so far this season. The Seahawks' offense has been incredible under QB Russell Wilson and company. The Seahawks score 34.3 points per game and earn 432.7 total yards per contest as well. The Seahawks defense has been shaky at times, as Seattle concedes 28.4 points per game to its opposition. The Seahawks will look to earn a big road win over another division leader in Buffalo.

The Buffalo Bills overcame its demons and finally defeated the New England Patriots at Bills Stadium in Week 8 by the final score of 24-21. The Bills are now 6-2 on the year and are 2.0 games ahead of the Miami Dolphins for first place in the AFC East. The Bills have now won two straight games against division rivals after losing back-to-back games to the Titans and Chiefs. The Bills score 24.8 points per game and earn 382.9 total yards per contest as well. The Bills' ground game was successful in the win over the Patriots, but QB Josh Allen was shaky at times in the passing game. Buffalo will have to be strong in both the passing and rushing game against a Seattle team that can score almost every drive.

The Seahawks open as 2.5-point favorites and the total is set at 55. Cam Newton and the Patriots offense did not produce a miserable performance against what is supposed to be a strong Bills defense in Week 8. This concerns me, as New England's offense is one of the worst in the league this season. I think Russell Wilson and the Seahawks are going to earn a comfortable road victory over the Bills in this one, as I do not see Josh Allen going toe-to-toe with a powerful Seahawks offense.