The New Orleans Saints are coming off a 26-23 overtime win over the Chicago Bears in Week 8. The Saints did not make it look pretty, but the team has now won four straight games and is a 0.5 game behind the Bucs for first place in the NFC South. New Orleans is 5-2 and in a great spot in the NFC playoff picture, but there is still plenty of work to do for Drew Brees and company. The Saints are one of two teams that have beaten the Buccaneers this season, a win that was in week one of the season in New Orleans. The Saints could take over the drivers' seat in the division with a win over their NFC South rivals in Tampa, but it will not be easy. The Saints score 29.4 points per game and earn 395.9 total yards per contest as well. The Saints also allow 28.1 points to their opposition this season, as their defense has taken a bit of a step back in terms of efficiency.

The Tampa Bay Buccaneers escaped MetLife Stadium with a very ugly 25-23 win over the New York Giants on Monday Night Football. Brady and the Bucs trailed in that game for much longer than they would have hoped for, but a win is a win at the end of the day. The Buccaneers are now 6-2 on the year and lead the NFC South. The Buccaneers have now won three straight after their road loss to the Bears on Thursday Night Football. The Bucs are a perfect 3-0 at Raymond James Stadium this season, and Tampa Bay will look to extend that record to 4-0 on Sunday night. The Bucs score around 30 points per game and allow 21 points per game to their opposition this season.

The Buccaneers open as 4-point favorites and the total is set at 54.5. I like Brady and the Buccaneers to bounce back from a shaky performance and take down their NFC South rivals in a comfortable game. I believe the Buccaneers' performance against the Saints in Week 1 was a fluke, and I like Tampa Bay to earn a feasible home win over the Saints. 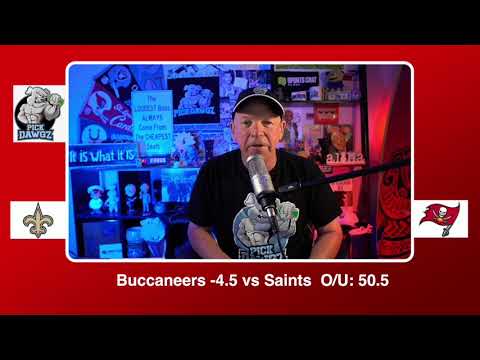