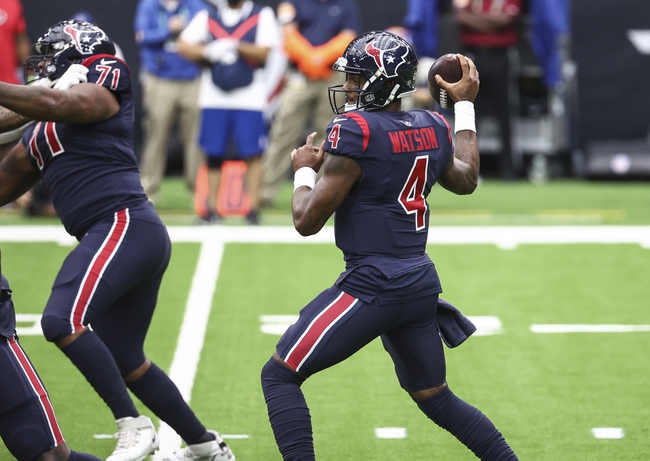 The Houston Texans will travel to TIAA Bank Field to take on the Jacksonville Jaguars this Sunday afternoon in NFL action.

The Houston Texans are coming off their bye week and are looking to get things on track after falling to 1-6 on the season after being defeated by the Green Bay Packers, 35-20, on October 25th. Houston struggled offensively agianst the packers defense and could not fight back after going into the 4th quarter trailing by a 28-7 margin. Houston was outgained by Green Bay by a 379-365 margin and lost the turnover battle by a 1-0 margin in the loss. Leading the way for the Texans was QB Deshaun Watson who completed 29 of 39 passes for 309 yards & 2 TD.

The Jacksonville Jaguars is also coming off their bye week and also are looking to rebound after a tough start to their season as the Jaguars dropped to 1-6 on the season after being defeated by the Los Angeles Chargers, 39-29, on October 25th. Jacksonville led Los Angeles by a 29-22 margin late in the 3rd quarter, however, the defense struggled the rest of the way and allowed the Chargers to get the victory after Los Angeles finished the game scoring 17 unanswered points. Jacksonville outgained Los Angeles by a 484-294 margin and lost the turnover battle by a 1-0 margin in the loss. Leading the way for the Jaguars was James Robinson who had 119 rushing yards & 1 TD on 22 carries while also adding a receiving TD.

Jacksonville was able to start off their season with a shocking win against Indianapolis, however, reality has set in as the Jaguars are looking like one of the worst teams in the NFL and could be in more trouble without Gardner Minshew II available this week. Houston has had a disappointing season, but there is not doubt that they are the more talented team in this one as I’m not concerned that their defense won’t be able to slow a Jaguars team that ranks 26th in scoring defense, I think Deshaun Watson and the Texans offense do enough to cover this home spread. Good Luck!