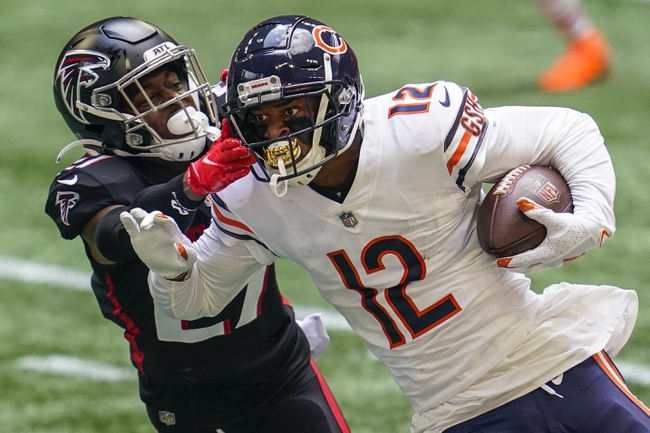 The Chicago Bears will travel to Nissan Stadium to take on the Tennessee Titans this Sunday afternoon in NFL action.

The Chicago Bears lost their 2nd straight game and dropped to 5-3 on the season after being defeated by the New Orleans Saints, 26-23 in OT, this past Sunday. Chicago scored 10 points over the final 3:32 to force OT, however, could not pull out the victory after the Saints converted a 35-yard FG with 1:36 left in overtime. Chicago was outgained by New Orleans by a 394-329 margin and lost the turnover battle by a 1-0 margin in the loss. Leading the way for the Bears was QB Nick Foles who completed 28 of 41 passes for 272 yards, 2 TD, & 1 INT.

The Tennessee Titans lost their 2nd straight game and dropped to 5-2 on the season after being upset by the Cincinnati Bengals, 31-20, this past Sunday. Tennessee struggled defensively against Joe Burrow and the Cincinnati offense and could not fight back after a 6-yard TD reception by Giovani Bernard gave the Bengals a 31-14 lead with 7:30 left in the 4th quarter. Tennessee outgained Cincinnati by a 441-367 margin, however, lost the turnover battle by a 1-0 margin in the loss. Leading the way for the Titans was WR Corey Davis who had 8 receptions for 128 yards & 1 TD.

Both Chicago and Tennessee come into this matchup riding 2-game losing streaks however, I am more concerned about the Titans as their defense is allowing an average of 31.3 ppg over their last three games. Chicago’s offense is never going to light up the scoreboard, however, I think that Nick Foles & Allen Robinson II will be able to find some success in this one and as I trust the Chicago defense to keep this game close, I think the play here is to take the Bears and the points. Good Luck.