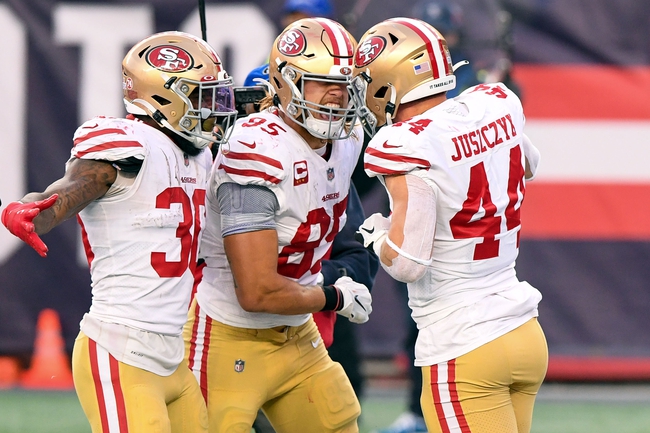 The San Francisco 49ers will travel to CenturyLink Field to take on the Seattle Seahawks this Sunday afternoon in NFL action.

The San Francisco 49ers won their 2nd straight game and improved to 4-3 on the season after defeating the New England Patriots, 33-6, this past Sunday. San Francisco dominated New England in all aspects of the game and had no trouble securing the victory after going into the 4th quarter with a 30-6 lead. San Francisco outgained New England by a 467-241 margin and forced the Patriots into committing 4 turnovers in the victory. Leading the way for the 49ers was Jeff Wilson Jr. who racked up 112 rushing yards & 3 TD’s on 17 carries.

The Seattle Seahawks suffered their first loss of the season, dropping to 5-1 on the year, after being defeated by the Arizona Cardinals, 37-34, this past Sunday night. Seattle looked like they had the victory in hand after taking a 10-point lead with just 6:44 left in regulation, however, Arizona was able to force OT on a 44-yard FG by Zane Gonzalez as time expired and won in OT after a Interception by Isaiah Simmons set up a 48-yard winning FG for the Cardinals. Seattle outgained Arizona by a 572-519 margin, however, did commit three turnovers in the loss. Leading the way for the Seahawks was WR Tyler Lockett had 200 receiving yards & 3 TD’s on 15 receptions.