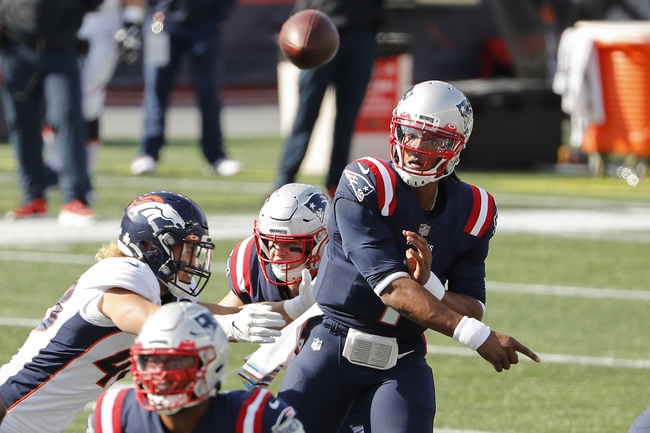 The San Francisco 49ers will travel to Gillette Stadium to take on the New England Patriots this Sunday afternoon in NFL action.

The San Francisco 49ers snapped their 2-game losing streak and improved to 3-3 on the season after defeating the Los Angeles Rams, 24-16, this past Sunday night. San Francisco looked outstanding after getting blown out the week before by the Miami Dolphins and had no trouble securing the victory after going into halftime with a 21-6 lead. San Francisco outgained Los Angeles by a 390-311 margin and won the turnover battle by a 1-0 margin in the victory. Leading the way for the 49ers was QB Jimmy Garoppolo who completed 23 of 33 passes for 268 yards & 3 TD’s.

The New England Patriots lost their 2nd straight game and dropped to 2-3 on the season after being defeated by the Denver Broncos, 18-12, this past Sunday. New England looked lost on the offensive end throughout the game against the Broncos defense, and although they had an opportunity late to get the victory, New England couldn’t fight all back after trailing by a 18-3 margin going into the 4th quarter. New England was outgained by Denver by a 299-288 margin and committed 3 turnovers in the loss. Leading the way for the Patriots was QB Cam Newton who completed 17 of 25 passes for 157 yards & 2 INT while also racking up 76 rushing yards & 1 TD on 10 carries.

I imagine the public is going to be heavy on San Francisco 49ers, however, I’m not going to get too caught up on last week’s results, especially when it comes to the Patriots as they really didn’t get too much practice prior to their Denver game due to COVID-19. San Francisco has their offensive weapons back, however, going on the road agianst a New England defense is also a challenge and as I expect the Patriots offense to look better against what is a banged up 49ers defense, I think Bill Belichick and the Patriots bounce back with a win here and cover this low, home spread. Good Luck!