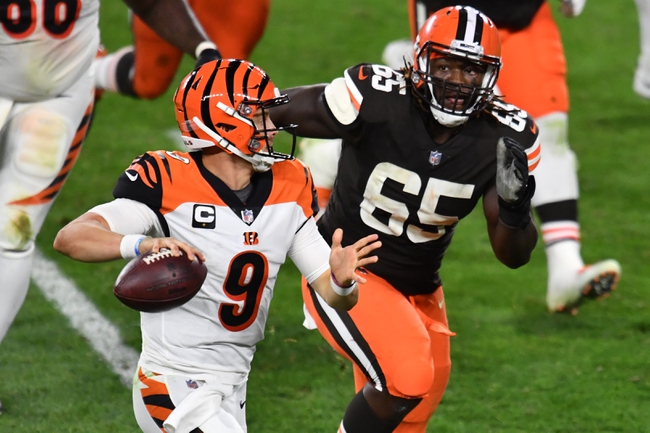 The Cleveland Browns will travel to Paul Brown Stadium to take on the Cincinnati Bengals this Sunday afternoon in NFL action.

The Cleveland Browns had their 4-game winning streak snapped and dropped to 4-2 on the season after being defeated by the Pittsburgh Steelers, 38-7, this past Sunday. Cleveland was overmatched by Pittsburgh on both sides of the field and could not fight back after a 28-yard TD reception by James Washington gave the Steelers a 24-0 lead midway through the 2nd quarter. Cleveland was outgained by Pittsburgh by a 277-220 margin and lost the turnover battle by a 2-0 margin. Leading the way for the Browns was TE Austin Hooper who had 52 receiving yards on 5 receptions.

The Cincinnati Bengals lost their 2nd straight game and dropped to 1-4-1 on the season after being defeated by the Indianapolis Colts, 31-27, this past Sunday. Cincinnati came out of the gates strong agianst the Colts, going up by a 24-7 margin midway through the 2nd quarter, however, the Bengals shrugged the rest of the way and allowed Indianapolis to take the lead for good after the Colts went up 28-27 on a 14-yard TD reception by Jack Doyle early in the 4th quarter. Cincinnati was outgained by Indianapolis by a 430-398 margin and committed one turnover in the loss. Leading the way for the Bengals was QB Joe Burrow who completed 25 of 39 passes for 313 yards & 1 INT while also rushing for a TD.

Cleveland got a big dose of reality last weekend and once agianst showed us that although they are improving, they are not ready to compete with the better teams in the NFL as they have lost by a combined score of 76-13 between Baltimore & Pittsburgh. Cincinnati is not going to win many games this season, but you have to be encouraged by what we have seen by the Bengals, especially in the offensive end as Joe Burrow looks like the real deal. Cincinnati lost by a 35-30 margin on the road to Cleveland earlier this season, however, as I expect the Bengals to have success agianst the Browns defense that ranked 30th in scoring defense, I think the play here is to Cincinnati at home with the points. Good Luck!