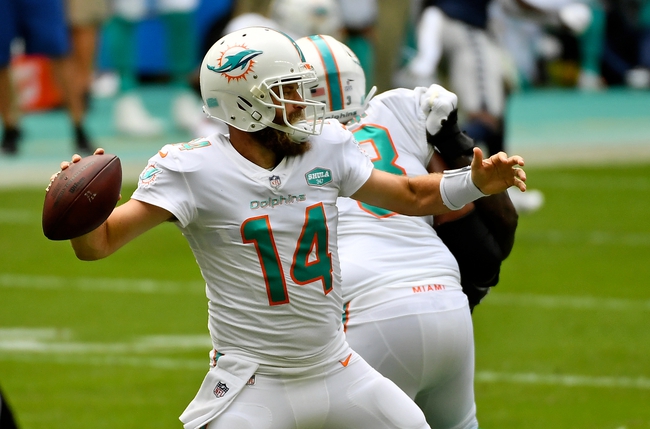 The New York Jets will travel to Hard Rock Stadium to take on the Miami Dolphins this Sunday afternoon in NFL action.

The New York Jets are still in search of their first win of the season as the Jets fell to 0-5 on the season after being defeated by the Arizona Cardinals, 30-10, this past Sunday. The Jets struggled on both sides of the ball throughout the game and could not fight back after a 1-yard TD run by Kenyan Drake gave the Cardinals a 24-10 lead late in the 3rd quarter. New York was outgained by an Arizona by a 496-285 margin in the loss. Leading the way for the Jets was WR Jamison Crowder who had 116 receiving yards and a TD on 8 receptions.

The Miami Dolphins improved to 2-3 on the season after defeating the San Francisco 49ers, 43-17, this past Sunday. In an impressive victory, Miami dominated the favored 49ers on both sides of the field and had no trouble cruising for victory after taking a 30-7 lead at halftime. Miami outgained San Francisco by a 436-259 margin and won the turnover battle by a 3-0 margin in the victory. Leading the way for the Dolphins was Ryan Fitzpatrick who completed 22 of 28 passes for 350 yards & 3 TD’s.

Miami is a better team than their 2-3 record indicates, and the Dolphins showed that were their complete domination of a good San Francisco 49ers team last week. New York got a boost with Le’Veon Bell back in the lineup, however, this is still an offense that is missing a ton of weapons and comes into this game ranked dead last in points scored per game and 28th in total yards. Miami is a decent team at home and as Ryan Fitzpatrick is playing at a high level, I think the Dolphins do enough to cover this large home spread. Good Luck!