The Detroit Lions will travel to TIAA Bank Field to take on the Jacksonville Jaguars this Sunday afternoon in NFL action.

The Detroit Lions are coming off their bye week hoping to bounce back after losing to the New Orleans Saints, 35-29, on October 4th, dropping the Lions to 1-3 on the season. Detroit was able to jump out to a quick 14-0 lead in the 1st quarter, however, the Lions allowed the Saints to score 35 unanswered points and couldn’t fight back after a 6-yard TD run by Latavius Murray gave the Saints a 35-14 lead with 8:52 left in the 3rd quarter. Detroit was outgained by New Orleans by a 392-281 margin and committed one turnover in the loss. Leading the way for the Lions was QB Matthew Stafford who completed 17 of 31 passes for 206 yards, 3 TD, and an INT.

The Jacksonville Jaguars lost their 4th consecutive game and dropped to 1-4 on the season after being defeated by the Houston Texans, 30-14, this past Sunday. Jacksonville struggled defensively against Deshaun Watson and the Houston offense and could not fight back after a 19-yard TD reception by Will Fuller V gave the Texans a 20-7 lead early in the 4th quarter. Jacksonville was outgained by Houston by a 486-364 margin and committed two turnovers in the loss. Leading the way for the Jaguars was Gardner Minshew II who completed 31 of 49 passes for 301 yards & 2 TD’s.

It’s hard to trust the Detroit Lions as a road favorite, however, Jacksonville is one of the worst teams in the NFL and despite their shocking season opening win agianst Indianapolis, the Jaguars have struggle as of late, losing their last three games to Houston, Cincinnati, & Miami by an average of 14.0 ppg. Jacksonville has struggled defensively this season, especially agianst opposing passing attacks and between that I think Matthew Stafford will have a big day and that Detroit did recently pick up an impressive win on the road agianst Arizona, I think the Lions do enough in this one to cover this spread. Take Detroit to cover. Good Luck! 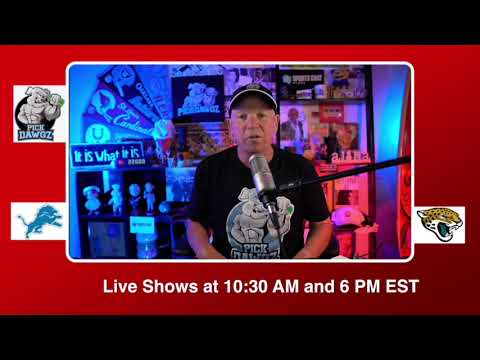