The New Orleans Saints will travel to Ford Field to take on the Detroit Lions this Sunday afternoon in NFL action.

The New Orleans Saints lost their 2nd straight game and dropped to 1-2 on the season after being defeated by the Green Bay Packers, 37-30, this past Sunday night. In an exciting, back-and-forth shootout, New Orleans could not fight back after the Packers made a 10-point game with just 2:00 minutes left in regulation on a 1-yard TD reception by Robert Tonyan. New Orleans outgained Green Bay by a 397-369 margin, however, could not slow down Aaron Rodgers who threw for 3 TD’s and did not force the Packers into committing any turnovers. Leading the way for the Saints was RB Alvin Kamara who had on top of his 58 rushing yards, hauled in 13 receptions for 139 yards & 2 TD’s.

The Detroit Lions picked up their first win of the season, improving to 1-2 on the season, after upsetting the Arizona Cardinals, 26-23, this past Sunday. Detroit’s defense was outstanding in this victory as they were able to pick off Arizona’s Kyler Murray three times and the Lions were able to pick up the come from behind victory after Matt Prater kicked a 39-yard FG as time expired. Detroit was outgained by Arizona by a 377-322 margin, however, did win the turnover battle by a 3-0 margin in the victory. Leading the way for the Lions was QB Matthew Stafford who completed 22 of 31 passes for 27 yards and 2 TD’s.

New Orleans has not gotten off to the start they were hoping for this season, however, this is still a good football team that should be one of the better teams in the NFC come playoff time. Detroit picked up a nice road win, but this is still a team still has some question marks on both sides of the ball and between the fact that I think the Saints will get Michael Thomas back along with the fact that I think Drew Brees will be able to do damage in the Saints passing game, I’m taking New Orleans to cover this small road spread. Good Luck. 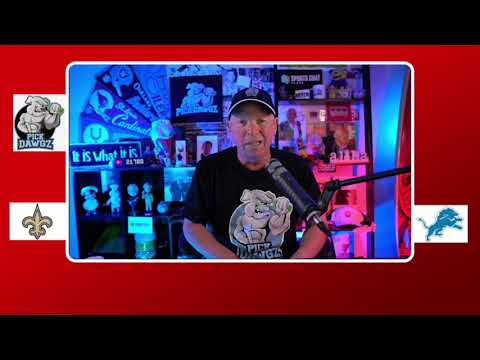