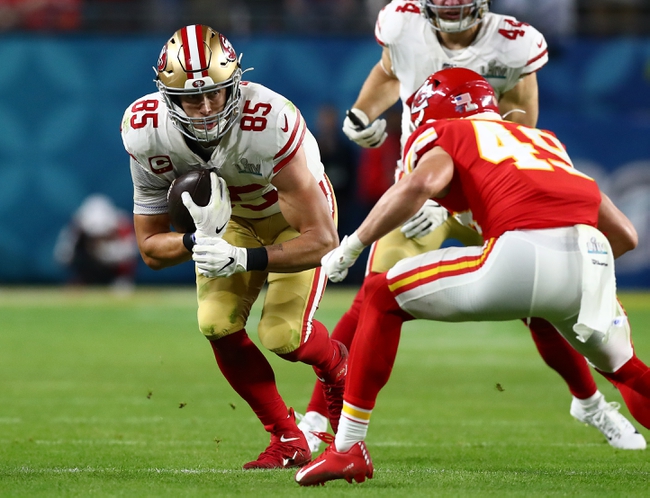 The San Francisco 49ers will travel to MetLife Stadium to take on the New York Giants this Sunday afternoon in NFL action.

The San Francisco 49ers improved to 1-1 on the season after defeating the New York Jets, 31-13 this last Sunday. San Francisco was outstanding defensively against the Jets, and had no trouble picking up the victory after going into halftime with a 21-3 lead. Leading the way for the 49ers was Raheem Mostert who had 92 rushing yards and a TD on just 8 carries.

The win, however, did come at great cost, as San Francisco lost a bunch of starters due to injury, including QB Jimmy Garoppolo, DL Solomon Thomas, DL Nick Bosa, RB Raheem Mostert, & RB Tevin Coleman. This is includes already missing their star TE, George Kittle, due to a knee injury. As of Monday, it looks like the 49ers have lost Nick Bosa for the season (ACL). Solomon Thomas (Knee) & Tevin Coleman (Knee) look like they will miss at least a few weeks. Raheem Mostert (MCL Sprain) is doubtful for this game and although the 49ers are saying that Jimmy Garoppolo (ankle) has a chance of playing, I do not think he will be ready. George Kittle really is the only one that we can say will most likely be back for this one.

The New York Giants dropped to 0-2 on the season after being defeated by the Chicago Bears, 17-13, this past Sunday. New York fell behind by a 17-0 margin early in this game, and although they fought back to make it a one-possession game after Dion Lewis 1-yard TD run early in the 4th quarter, the Giants couldn’t do enough offensively to get the come from behind victory. Leading the way for the Giants was TE Evan Ingram who had 6 receptions for 65 yards.

Similar to the San Francisco 49ers, the Giants suffered some tough injuries which included losing their star RB, Saquon Barkley, for the season due to an ACL tear. Sterling Shepard (toe) was also injured and could miss multiple game depending on the results of his MRI.

San Francisco has piled up injuries through the first two weeks like I have never seen and although they will be missing many key players, no injury is as impactful than the Giants losing Saquon Barkley for the season. San Francisco will still have some solid offensive weapons with George Kittle and Jerick McKinnon and I do not mind Nick Mullens under center if Jimmy Garoppolo can't go. Daniel Jones has been good for the Giants, however, I think the Giants offense will continue to have trouble putting points up on the board in this one and I think that the San Francisco offense does enough for the 49ers to cover. Good Luck.