The Miami Dolphins are coming off a loss to the Buffalo Bills in week two by the final score of 31-28. The Dolphins looked a lot sharper in week two of the season, as the offense was able accumulate 28 points and 410 yards. Ryan Fitzpatrick played very well for the Dolphins, throwing for 328 yards and two touchdowns. The Dolphins are now 0-2 heading into week three of the season, and the biggest question mark remains when Tua Tagovailoa will be put in at the quarterback position? Fitzpatrick has not played too poorly, but with an 0-2 record at QB, the Dolphins may try and make the move soon. The Dolphins will now take on a Jaguars team that has allowed 53 points combined between its first two games. The Dolphins will have to take advantage of a weaker secondary in order to win this game.

The Jacksonville Jaguars suffered a tough loss to the Tennessee Titans in week two by the final score of 33-30. The Jags were down early in this game, as the Titans offense poured it on early and often. The Jaguars were much stronger on both sides of the ball in the second half, as Gardner Minshew made every effort to get his team back in the game. The Jaguars were able to tie the game at 30-30 late in the fourth quarter, but Tennesee fired back with a field goal with under two minutes to go. Minshew and the Jags started driving down the field, but a tipped pick ended their chances and the Titans held on. The Jaguars are now 1-1 on the year and they will be playing in their second home game of the season on Thursday Night Football.

The total is too low for this game, as both team's defenses do not impress me at all. I think Fitzmagic and Minshew Magic will be in full effect in this game, with both teams scoring left and right. I will take the over 44 in this game. 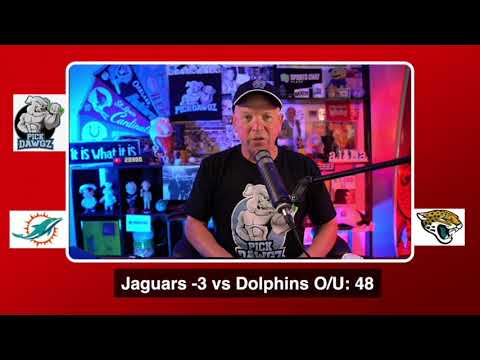