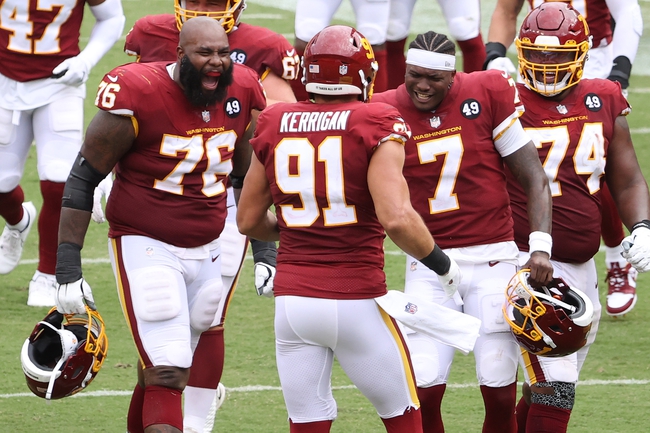 The Washington Football Team and the Arizona Cardinals were two teams that pulled off major upsets in week one of the NFL season.

The Washington Football Team was down 17-0 to the Philadelphia Eagles in the first half of their game in week one, but somehow, Washington was able to mount an impressive comeback. Washington scored 27 unanswered points to win the game by the final score of 27-17. Washington racked up eight sacks in the game, which is an unreal total for this team. Washington made Carson Wentz's life very difficult in the second half of that game, and the result was the first win of the season for Washington. Washington's offense started out slow at the beginning of the game, but as time marched on, Washington was able to find timely scores. Peyton Barber rushed for two touchdowns in the win, despite only rushing for 29 yards on a whopping 17 carries. Washington will look to build on its first win of the season, but it will not get any easier when they travel to Arizona.

The Arizona Cardinals took down the defending NFC Champions in week one of the NFL season by the final score of 24-20. Just as Washington did, the Cardinals had to come back from a double-digit deficit early on in the game, as the 49ers jumped out to a 10-0 lead. The Cardinals battled back in a game that went back and forth, and the Arizona defense came up clutch during the final competitive drive of the game. The 49ers had the ball at the Arizona 16 yard line, but on 4th and 5, an incomplete pass turned the ball over on downs to end the game. De'Andre Hopkins had himself a night, as he earned 14 receptions for 151 yards in the win for the Cardinals.

Not too many people thought that both Washington and the Cardinals would be 1-0 heading into this week two contest. I think Washington's offensive struggles may end up biting them in this game, and I think the Cardinals looked a bit more complete in their win over San Francisco. I am going to take the Arizona Cardinals and lay the seven points, but this game should be tight in the first half, with the Cards pulling away at the end.