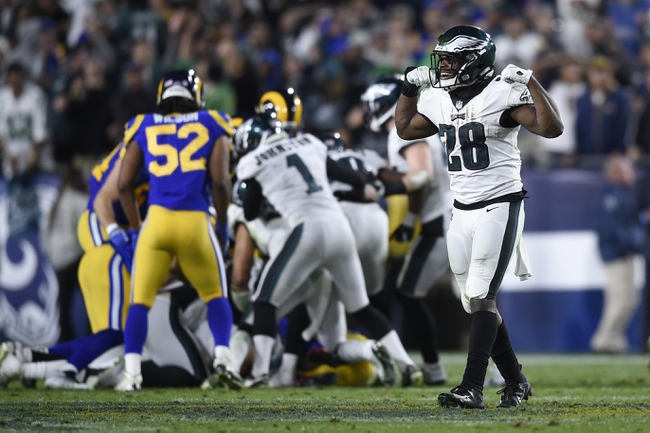 The Los Angeles Rams will travel to Lincoln Financial Field to take on the Philadelphia Eagles this Sunday afternoon in Week 2 of NFL action!

The Los Angeles Rams opened up their 2020 season on a positive note as the Rams defeated the Dallas Cowboys by a 20-17 margin. The Rams opened up the game with an impressive TD drive that was finished off by a 1-yard TD run by Malcolm Brown and was able to hold off the Cowboys in the 2nd half behind a strong defensive effort that held the Cowboys to just three 2nd half points. Los Angeles outgained Dallas by a 422-380 margin and dominated the time of possession battle against the Cowboys.

Offensively, the Rams were led by RB Malcom Brown who ended up being the lead back for the Rams in Week 1 with 79 rushing yards and 2 TD’s on 18 carries. Rookie Cam Akers also played a big role in the Los Angeles backfield, but less productive as he finished the game with just 39 rushing yards on 14 carries. QB Jared Goff completed 20 for 31 passes for 275 yards but was not able to find the end zone and did commit one interception. The leading receivers for the Rams were Robert Woods (6 rec, 105 yards), Tyler Higbee (3 rec, 40 yards), and Copper Kupp (4 rec, 40 yards). Rookie WR Van Jefferson made a solid 31-yard catch and looks like he will have more of a role in the offensive going forward after Josh Reynolds was targeted just once.

Defensively, the Rams should be pretty solid this season and are led by two superstars in Aaron Donald & Jalen Ramsey.

The Philadelphia Eagles had a disappointing start to their 2020 season after being upset by the Washington Football Team, 27-17. Philadelphia looked like they had this game in cruise control after racing out to a 17-0 lead, however, both sides of the ball struggled the rest of the way and allowed Washington to score 27 unanswered points to get the come from behind victory. Philadelphia outgained Washington by a 265-239 margin, however, loss the turnover battle by a 3-0 margin in the loss.

Offensively, the Eagles were led by TE Dallas Goedert who had 8 receptions for 101 yards and a TD. Zack Ertz saw 7 targets and finished the game with 3 receptions for 18 yards and a TD. QB Carson Wentz finished the game completed just 24 for 42 passes for 270 yards, 2 TD, and 2 INT. Wentz finished with a QB rating of just 72.5 and could not get anything going for the Eagles offense in the 2nd half. Philadelphia was without Miles Sanders due to a hamstring injury and did not get much from the rushing attack of Boston Scott (9 att, 35 yards) & Corey Clement (6 att, 19 yards). Philadelphia was also without Alshon Jeffrey due to injury and did not get much from their other WR’s Jalen Reagor (1 rec, 55 yards), DeSean Jackson (2 rec, 46 yards) & Greg Ward (5 rec, 31 yards).

Defensively, Philadelphia will most likely be nothing more than average this season and was led by Nathan Gerry (10 tackles; 2 TFL) in their season opener.

It’s hard to trust the LA Rams when they travel east and despite the Eagles looking awful in their 2nd half loss agianst Washington, this is a defense that generally plays better at home while the offense should have Miles Sanders back in the mix. Philadelphia strength in the passing game goes through their two talented TE’s which should have limit the impact that Jalen Ramsey will have and as long as Sanders is back, I think Philadelphia bounces back in this one and covers this small home spread.