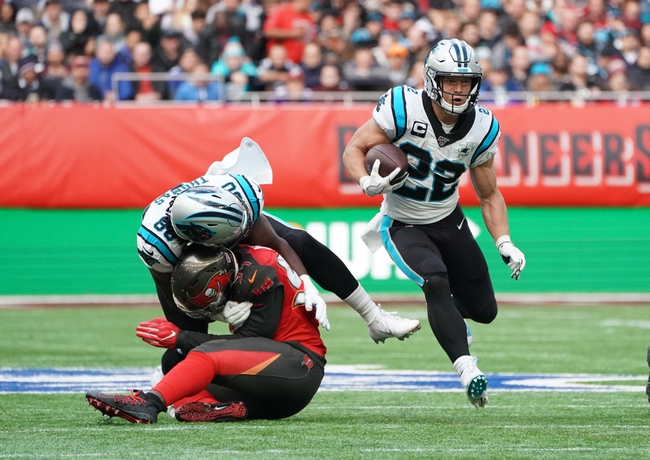 The Carolina Panthers will travel to Raymond James Stadium to take on the Tampa Bay Buccaneers this Sunday afternoon in Week 2 of NFL action.

The Carolina Panthers opened up their 2020 season with a disappointing 34-30 loss to the Las Vegas Raiders this past Sunday. In a high scoring affair, Carolina fought back from a 27-15 2nd half deficit to take a 30-27 lead midway through the 4th quarter, however, the Raiders were able to take the lead for good after Josh Jacob’s 3rd TD of the day gave the Raiders a 34-30 lead with 4:08 left in the 4th quarter. Carolina outgained Las Vegas by a 388-372 margin and did not commit a turnover in the loss.

Offensively, Carolina was led by their star RB Christian McCaffrey who had 96 rushing yards and 2 TD’s on the ground while also hauling in 3 receptions for 38 yards. QB Teddy Bridgewater was impressive in his Carolina debut as he completed 22 of 34 passes for 270 yards and a TD for a QB rating of 98.9. Bridgewater also showed that he can be dangerous with his legs when he needs to be as he picked up 26 rushing yards on just 4 carries. The Carolina receivers were led by the Robby Anderson (6 rec, 115 yards, 1 TD) who showed his big play ability on a huge 75-yard TD catch. DJ Moore (4 rec, 54 yards), Curtis Samuel (5 rec, 27 yards), and Ian Thomas (2 rec, 16 yards) all played significant roles in the Carolina passing game and should be the main targets throughout the season.

Defensively, Carolina struggled against both the Raiders passing game and rushing game as Derek Carr put up a QB rating of 107.5 while Jacobs had 3 TD’s and 93 yards on the ground. Carolina’s defense was led by Shaq Thompson who had 12 total tackles and 1.5 TFL.

The Tampa Bay Buccaneers made the biggest noise during the offseason, picking up Tom Brady, Rob Gronkowski, LeSean McCoy, & Leonard Fournette, however, it was a disappointing start to their season as they were defeated by the New Orleans Saints by a 34-23 margin. Tampa Bay made it a game in the 2nd half after 10 unanswered points in the 3rd quarter put the Buccaneers within a TD of tying the game, however, Tampa Bay couldn’t fight back after an early 5 yard TD catch by the Saints Emmanuel Sanders gave New Orleans a 31-17 lead with 11:38 left in the game. Tampa Bay outgained New Orleans by a 310-271 margin, however, lost the turnover battle by a 3-0 margin in the loss.

Offensively, Tampa Bay was led by Tom Brady who completed 23 of 36 passes for 239 yards, 2 TD’s, & 2 INT while also adding a rushing TD, however, Brady did make many mistakes in his new offense, including throwing a pick-six for this 3rd consecutive game. Chris Godwin (6 rec, 79 yards), Scotty Miller (5 rec, 73 yards), O.J. Howard (4 rec, 36 yards, TD) were the main receiving threats for the Buccaneers but it has to be concerning that Rob Gronkowski & Mike Evans combined for just 3 receptions for 13 yards and a TD. Leading the backfield for Tampa Bay was Ronald Jones II who had 66 rushing yards on 17 carries. Leonard Fournette made little impact as he had just 5 rushing yards on 5 carries.

Defensively, Tampa Bay’s defense play better than what the final score indicates as did a good job agianst both Drew Brees and Michael Thomas. Leading the way for the Buccaneers defense was Lavonte David & Devin White who had 11 tackles each.

Tampa Bay will get better as the season goes on and they had a tough matchup on the road against one of the best teams in the NFC, however, this offense certainly looked like it’s more than a week away from finding it’s rhythm. Carolina is going to give up plenty off points this season, however, their offense certainly has the weapons to put up points led by Bridgewater & McCaffrey and I think Carolina does enough on the offensive end in this one to cover with the points. Good Luck!