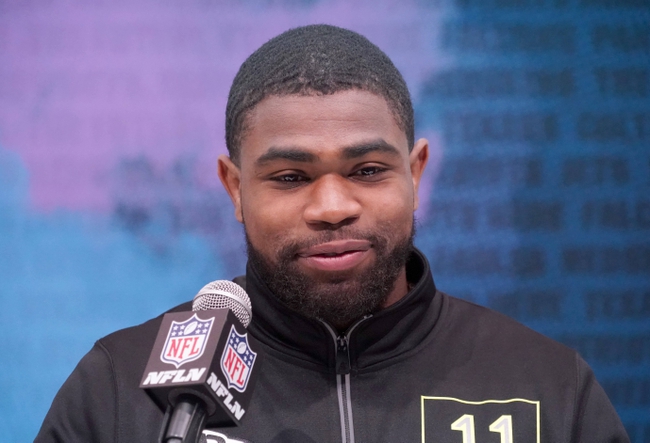 Where Will Clyde Edwards-Helaire Be Drafted?

Clyde Edwards-Helaire is a product out of LSU and will be part of a great 2020 draft class for running backs.  The LSU running back put on quite the display during LSU’s championship season.  Edwards-Helaire rushed for 1,414 yards and 16 touchdowns, averaging 6.6 yards per carry.  The dynamic running back played just 3 seasons of college ball, with his junior year being the best. He also added over 450 yards receiving on 55 receptions during the 2019 campaign.

Pros/Cons: Edwards-Helaire showed how well he can be used on multiple plays in a row.  His durability was impressive during the 2019 season.  The LSU standout showed he is versatile, as he can not only rush, but can hold his own in the passing game.  Edwards-Helaire is more than capable of being a receiver out of the backfield at the next level. However, he will need to work on his blocking.

For more on Clyde Edwards-Helaire's college career, pros, cons, and more take a look at his draft profile.

Over 32.5 -900: The odds suggest that Edwards-Helaire will not be taken in the 1st round.  While he had a dynamic season this past year for LSU, I like the odds that he will not be taken in the 1st round.  This is not a knock on his ability, there are just a few other running backs I like to be taken over him, as this is a top heavy running back group in the draft.  D’Andre Swift is the best running back in this draft, with Jonathan Taylor and J.K. Dobbins just behind him.

Dobbins looks to be at best a low 1st round pick, but odds would suggest he won’t be taken till the 2nd round.  Therefore, it is hard to imagine Edwards-Helaire will be taken before pick 33.

Under 32.5 +500: The odds are high for the LSU running back, as he is slated behind Swift, Taylor, and Dobbins.  A mid 2nd round pick to late 2nd round pick seems to be more appropriate for a draft position.  The other running backs have had more success in multiple seasons in a row, whereas Edwards-Helaire did not have back to back 1,000 yard seasons. The over seems like the best fit in this situation.