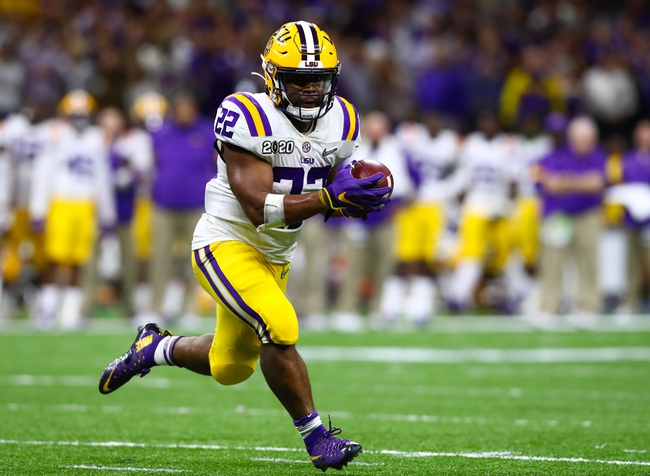 Clyde Edwards-Helaire is a product out of LSU and will be part of an outstanding 2020 draft class for running backs.  Edwards-Helaire had an impressive season, but at times was forgotten about due to the season Heisman Trophy winner Joe Burrow had.  Let us take a look at his college career, pros, cons, and projected teams.

College Career: The running back needed just 3 seasons to impress scouts from the NFL level.  The junior running back rushed for over 2,000 yards during his career at LSU, while adding 24 total touchdowns, with 23 being on the ground.  Edwards-Helaire didn’t do as much his sophomore season, collecting just 658 yards on the ground and finding the end zone 7 times.  However, he burst out of the gates from the start of the season during his junior year.  During the 2019 season the running back rushed for 1,414 yards and 16 touchdowns, while contributing 55 receptions for 453 yards and another score.

Pros: Edwards-Helaire showed he can be used on just about every down, his durability was on display during the 2019 season.  Just like J.K. Dobbins, the LSU running back showed he can be a dual threat, as he can not only rush, but also proved he is very reliable in the passing game.  Once the ball is in his grasp is when he makes heads turn.  Edwards-Helaire was great at making players miss once through the line of scrimmage.

Cons: He doesn’t have electric breakaway speed, which isn’t always an issue.  While the running back is solid as a pass catcher in the passing game, he will need to improve on protecting the quarterback when he isn’t used as a receiver.  Can he sustain success like this in multiple seasons?

Projected Teams: Edwards-Helaire will end up being a running back that will be used as a rusher, but until he gathers some more experience, he more than likely will not be used as a number 1 running back. Therefore, a few places that have been projected are the Atlanta Falcons and Detroit Lions.

The Atlanta Falcons could be a solid option as Atlanta signed former Rams running back Todd Gurley.  Gurley showed signs of regression this past season.  Edwards-Helaire would be a nice addition to have alongside Gurley for the Falcons.  The LSU product would be more than capable of spilling Gurley when needed and Edwards-Helaire could be more suited in the passing game over Gurley.

Tampa Bay Buccaneers also need an upgrade at running back.  Depending if Tampa Bay goes a different route than drafting a running back in the first round, Edwards-Helaire would be a nice pick in the 2nd-3rd round.  The Buccaneers need to upgrade their running game with Tom Brady at quarterback.

Get Premium Picks Start Winning Now »
The pick in this article is the opinion of the writer, not a PickDawgz site consensus.
Previous Pick
How Many Ohio State Players Will Be Taken During the 1st Round? 2020 NFL Draft Bets.
Next Pick
Clyde Edwards-Helaire: 2020 NFL Draft Props