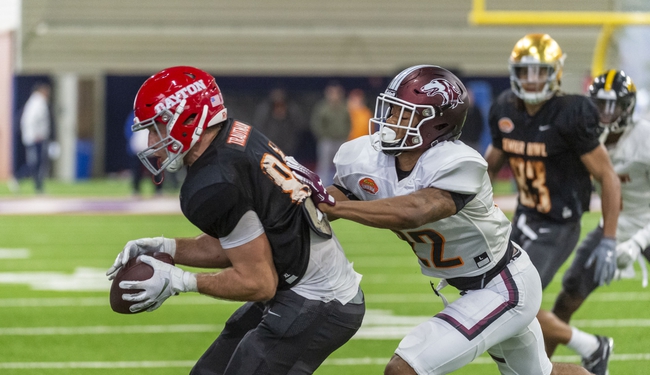 Where Will Adam Trautman Be Drafted?

Adam Trautman a Dayton product should be one of the first FCS players taken in the 2020 draft, as well as one of the first tight ends from both levels taken.  He has been one of the best receiving tight ends over the last two years.  There are a few teams that could use Trautman, let us take a look at where Trautman could be drafted.

College Career: Although Trautman played for Dayton in the Pioneer Conference at the FCS level, NFL teams and scouts know all about the pass catching tight end.  The tight end was a 4 year plater for the Dayton program.  The Dayton product had his best season during the 2019 campaign.  Trautman registered 70 receptions for 916 yards and 14 touchdowns.  The tight end reeled in 178 receptions for his career, totaling almost 2,300 yards for a career.  He was honored for numerous accolades during this past college football season.

Pros/Cons: Trautman displays an enticing wingspan and should grab teams attention early on in the draft.  One area of strength that is noticeable is his hands. Trautman was as consistent as it got hauling in passes anywhere in his territory.   He has solid speed for a tight end, but will need to improve on his blocking.  Trautman will need to work on his blocking if he wants to be used as a primary tight end right away, but he will ultimately need some time to develop as a blocker.

Over 32.5 -3500: Obviously when you look at the odds, the odds are a strong indicator that Trautman will be taken after the first round.  The teams that need a tight end are the Green Bay Packers, New England Patriots, and Pittsburgh Steelers.  When you look at where these teams are slotted in the first round, the Patriots have the 23rd pick, Packers 30th pick, and the Steelers are idle. Pittsburgh has their first pick at number 49, while Green Bay is at number 63. New England would need to draft Trautman with their first round pick if they want him badly enough, because he probably won’t be available when New England gets their next pick at number 87.  Take a look in his draft profile on why these three teams make the most sense.

Under 32.5 +900: It is not likely that Trautman will be taken in the first round, as most teams will be looking for that player that is versatile and is ready to be thrown into the action.  Trautman will need work on his blocking and teams will want him to develop more before being used as a primary tight end.  However, Trautman should see time in the receiving game as a pass catcher.

Get Premium Picks Start Winning Now »
The pick in this article is the opinion of the writer, not a PickDawgz site consensus.
Previous Pick
Yetur Gross-Matos 2020 NFL Draft Profile, Pros, Cons, and Projected Teams
Next Pick
How Many Ohio State Players Will Be Taken During the 1st Round? 2020 NFL Draft Bets.