The San Francisco 49ers and the Seattle Seahawks meet in a week 17 NFC West division matchup from CenturyLink Field on Sunday night.

The San Francisco 49ers will be looking to lock up the top seed in the NFC after a 34-31 win over the Los Angeles Rams in their last outing. Jimmy Garoppolo threw for 248 yards, a touchdown and 2 interceptions on 16 of 27 passing while Raheem Mostert led the Niners with 53 rushing yards and a touchdown. Tevin Coleman added 33 rushing yards and Deebo Samuel added a rushing TD as well. George Kittle led the 49ers with 5 catches for 79 yards and a touchdown while Emmanuel Sanders added 61 receiving yards. Defensively, Dre Greenlaw led San Francisco with 13 total tackles including 9 solo tackles while Fred Warner had 11 total tackles with 8 solo tackles and a 46-yard interception which was returned for a touchdown. As a team, San Francisco is averaging 379.9 yards of total offense and 30.3 points per game while allowing 277.4 yards of total defense and 19.3 points per game against this season.

The Seattle Seahawks will look to rebound after a 27-13 loss to Arizona in their last outing. Russell Wilson threw for 169 yards and a touchdown on 16 of 31 passing while Chris Carson led the Seahawks with 40 rushing yards on 8 carries. Jacob Hollister led the Seahawks in receiving with 64 receiving yards while Travis Homer had a team-high 6 grabs for 26 yards and Nick Bellore had a touchdown grab. Defensively, Bobby Wagner and K.J. Wright each had 13 total tackles with Wagner logging a team-high 7 solo tackles and a sack. As a team, Seattle is averaging 376.2 yards of total offense and 25.6 points per game while allowing 380.5 yards of total defense and 24.8 points per game against this season.

I kind of understand San Francisco being favored here as they’re in the driver’s seat for the top seed in the NFC and Seattle’s running back situation is a mess with their top two running backs out for this game. However, this is as big of a game as it gets in the regular season, and even though Jimmy G has had some solid performances this season, I trust Russell Wilson more in the high-pressure situation. You also can’t ignore the effect that CenturyLink Field and the 12th man has on a game, and I expect the 12th man to be out in full force with how much is at stake here. I’ll take a shot with Seattle and the points in a game I see being decided late.

Get Premium Picks Start Winning Now »
The pick in this article is the opinion of the writer, not a PickDawgz site consensus.
Previous Pick
Baltimore Ravens vs. Pittsburgh Steelers - 12/29/19 NFL Pick, Odds, and Prediction
Next Pick
Cincinnati Bengals: 2020 NFL Draft Needs 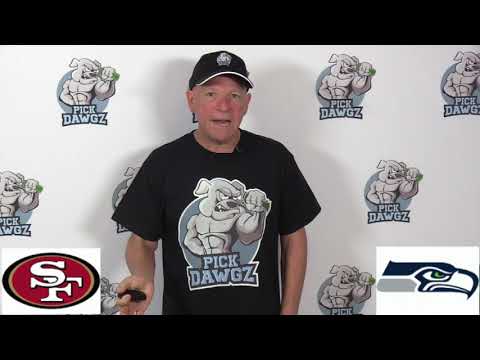