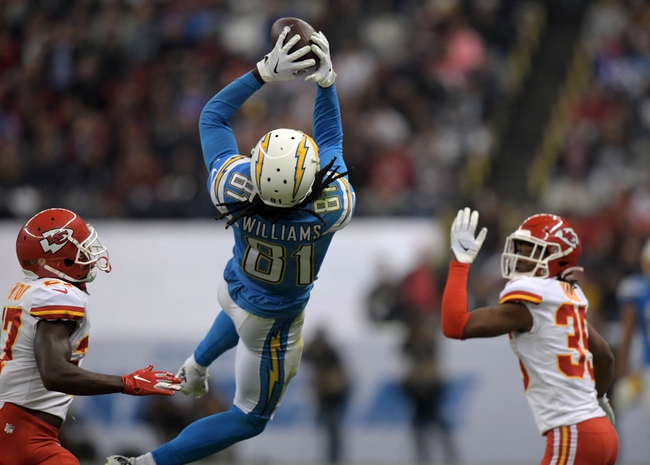 The Los Angeles Chargers and the Kansas City Chiefs meet in a week 17 AFC West division matchup from Arrowhead Stadium on Sunday afternoon.

The Los Angeles Chargers will look to finish the season on a high note after falling to 5-10 with a 24-17 loss to Oakland last time out. Philip Rivers threw for 279 yards on 27 of 39 passing while Melvin Gordon rushed for 15 yards and a pair of touchdowns. Keenan Allen led the Chargers with 71 receiving yards with 5 catches while Austin Ekeler had 5 grabs for 58 yards. Gordon had a team-high 6 catches as well in the losing effort for the Chargers. Defensively, Derwin James led the Chargers with 8 total tackles while Drue Tranquill had a team-high 6 solo tackles and Melvin Ingram III had 1.5 sacks. As a team, Los Angeles is averaging 367.5 yards of total offense and 21.1 points per game while allowing 311.5 yards of total defense and 20.9 points per game against this season.

The Kansas City Chiefs will look to head into the postseason strong, winning five straight after a 26-3 win over Chicago last time out. Patrick Mahomes threw for 251 yards and 2 touchdowns on 23 of 33 passing while also rushing for a touchdown as well. Damien Williams led the Chiefs with 65 rushing yards on 16 carries while Travis Kelce led the Chiefs with 8 catches for 74 yards and a touchdown. Tyreek Hill had 5 catches for 72 yards while the aforementioned Williams added 3 grabs for 27 yards and a touchdown. Defensively, Tyrann Mathieu and Anthony Hitchens each had 6 total tackles with Mathieu logging 6 solo tackles while Chris Jones, Frank Clark and Reggie Ragland each had a sack. As a team, Kansas City is averaging 382.1 yards of total offense and 28 points per game while allowing 348.5 yards of total defense and 19.1 points per game against this season.

This feels like a lot in a division game, but the fact is that the Chiefs still have a ton to play for while Los Angeles not only has nothing but pride to play for, but the Chargers have been one of the most disappointing teams in the NFL this season. The Chiefs have just been steamrolling teams on both sides of the ball over the last month and I see things being no different here. I’ll lay the points with the Chiefs in this spot.