The Green Bay Packers come into this one looking to lock up the division and add to their three-game winning streak after a 21-13 win over Chicago in their last outing. Aaron Rodgers threw for 203 yards and a touchdown on 16 of 33 passing while Aaron Jones led the Packers in rushing with 51 yards and a pair of rushing scores. Davante Adams led Green Bay in receiving with 7 grabs for 103 yards and a touchdown while Jake Kumerow added 49 receiving yards. Defensively, Blake Martinez led Green Bay with 11 total tackles while Kenny Clark had a pair of sacks. As a team, Green Bay is averaging 336.6 yards of total offense and 23.6 points per game against while allowing 371.3 yards of total defense and 20.2 points per game against this season.

The Minnesota Vikings will look to build on a 39-10 beatdown of the Los Angeles Chargers in their last outing. Kirk Cousins threw for 207 yards, a touchdown and an interception on 19 of 25 passing while Mike Boone led the Vikings in rushing with 56 rushing yards and a pair of touchdowns on 13 carries. Stefon Diggs led Minnesota in receiving with 4 catches for 76 yards while Kyle Rudolph had 3 grabs for 48 yards and Irv Smith Jr. had a touchdown grab. Defensively, the Vikings recovered four fumbles, while Anthony Harris, Mike Hughes and Harrison Smith each had an interception and Eric Kendricks had a team-high 7 total tackles. As a team, Minnesota is averaging 372.6 yards of total offense and 27 points per game while allowing 338.9 yards of total defense and 18.5 points per game against this season.

I’ve gone back and forth on this game and this is a solid game to finish off Monday night football for the year. However, while Minnesota is a solid team and have a strong history ATS at home, I just get the feeling like there’s too much at stake for Green Bay to just let the Vikings run away with this one. I think the number is right on, and I see this being a 24-20 game or something in that area, so I’ll take Green Bay and the points here.

Get Premium Picks Start Winning Now »
The pick in this article is the opinion of the writer, not a PickDawgz site consensus.
Previous Pick
Chicago Bears vs. Kansas City Chiefs - 12/22/19 NFL Pick, Odds, and Prediction
Next Pick
NFL Playoff Scenarios: Week 17, 2019 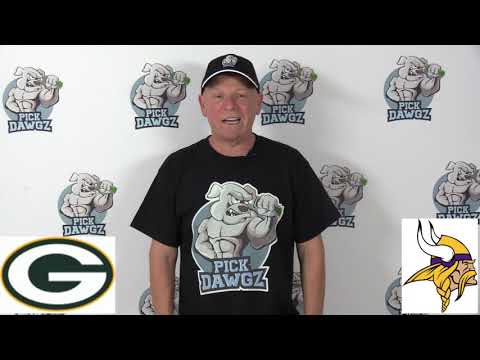