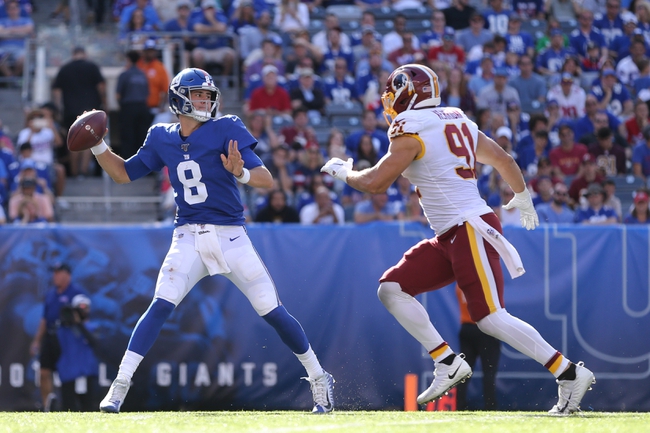 The New York Giants and the Washington Redskins meet in NFL action from FedEx Field on Sunday.

The Giants come in here at 3-11 so far. New York was on an ugly nine-game losing streak to the Vikings, Patriots, Cardinals, Lions, Cowboys, Jets, Bears, Packers and Eagles but won their last game over Miami.

Over on the Redskins’ side, they’re 3-11 also. Washington has gone 2-2 over their last four games, with wins over the Lions and Panthers alongside losses to the Packers and Eagles.

In the loss to Philly, Redskins QB Dwayne Haskins posted 261 yards with two touchdowns. Adrian Peterson had 66 yards and a score, while Terry McLaurin added 130 yards and a TD on five catches.

New York finally got going statistically against the Dolphins (despite the three picks), and got a nice outing from Barkley en route to 36 points in a much-needed win. Prior to that game, the Giants had scored 17 or fewer points in three straight games.

Visiting the Redskins will present another very winnable game, but Washington has been fairly competitive over their last four games or so. Still, if the Giants can make good use of their offensive weapons I can see New York bagging a cover here.