The New Orleans Saints and the Tennessee Titans meet in a week 16 NFL matchup from Nissan Stadium on Sunday afternoon.

The New Orleans Saints will look to stay in the hunt for a first round bye after a 34-7 win over Indianapolis on Monday night football brought the Saints to 11-3. Drew Brees completed 29 of his 30 pass attempts for 307 yards and 4 touchdowns while Alvin Kamara led the Saints in rushing with 66 rushing yards on 14 carries. Michael Thomas led the Saints with 12 catches for 128 yards and a touchdown while Taysom Hill, Tre’Quan Smith and Josh Hill each had a touchdown grab as well. Defensively, C.J. Gardnet-Johnson had a team-high 8 total tackles while A.J. Klein and Trey Hendrickson split a sack in the victory. As a team, New Orleans is averaging 373.3 yards of total offense and 27 points per game while allowing 328.8 yards of total defense and 21.6 points per game against this season.

The Tennessee Titans will look for a bounce back after a 24-21 loss to Houston in their last outing. Ryan Tannehill threw for 279 yards, 2 touchdowns and an interception on 22 of 36 passing while Derrick Henry led the Titans with 86 rushing yards on 21 carries. A.J. Brown led Tennessee in receiving with 8 catches for 114 yards and a touchdown while Jonnu Smith had 5 grabs for 60 yards, Corey Davis had 3 for 57 and Dion Lewis added a touchdown catch as well in the win. Defensively, Jayon Brown led the Titans with 10 total tackles while Kamalei Correa added a sack with Brown and Kenny Vaccaro each logging an interception. As a team, Tennessee is averaging 352.9 yards of total offense and 24.2 points per game while allowing 362.4 yards of total defense and 19.9 points per game against this season.

Tennessee as a home dog is tempting given how the Titans have surged to put themselves in a decent spot this late in the season. However, I think last week was their best chance to control their fate, and New Orleans is not a team I’d want to play with so much at stake as the Saints would love to have the NFC go through the Superdome. Add in the fact that the Saints have been covering machines on the road for a couple of years now, and I think you have to lay the points with the Saints on the road here. 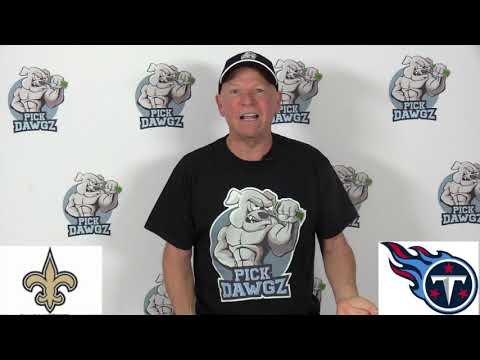