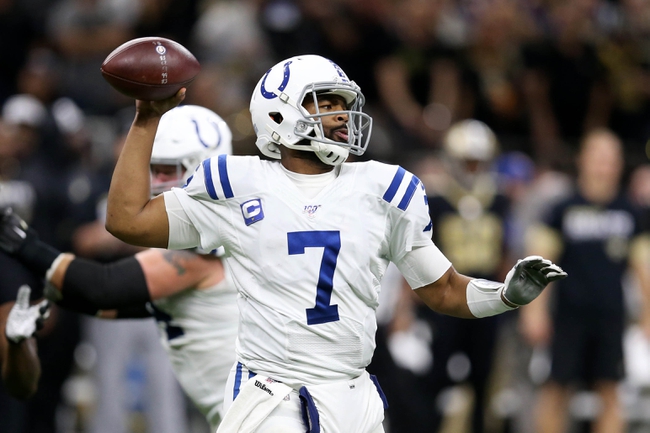 The Carolina Panthers and the Indianapolis Colts meet in NFL action from Lucas Oil Stadium on Sunday.

Carolina comes in here at 5-9 on the year. The Panthers are currently riding a six-game losing streak, falling to the Packers, Falcons, Saints, Redskins, Falcons again and Seahawks.

In the loss to the Seahawks, Carolina QB Kyle Allen posted 277 yards with a TD and three INTs. Christian McCaffrey led the run on 87 yards and two scores, and DJ Moore had 113 yards from eight receptions.

Over on the Colts’ side, they’re 6-8 this year. Indianapolis is currently on a four-game losing streak, falling to the Texans, Titans, Buccaneers and Saints during that stretch of outings.

Indianapolis suffered a crushing loss on Monday against New Orleans, and didn’t score until garbage time in a 34-7 defeat. On defense there, the Colts allowed a historic night to Drew Brees, who broke records for career pass TDs and completion percentage in a game.

Carolina has had a few tough matchups during this losing streak (Packers, Saints) and also a few relatively bad teams (Falcons, Redskins). Though they’ve been collecting L’s like flies, the Panthers have been competitive in most of the recent losses.

As for the Colts, they showed some promise earlier in the season but just aren’t playing well overall and have zero consistency. For example, even after a much-needed offensive surge of 35 points, Indy still couldn’t hang on against the Bucs. Games like that have been the story of Indy’s season—letting alone the embarrassing blowout on Monday courtesy of a great Saints team.

I’m not wild about it, but I’m taking Carolina to cover in a game with very little intrigue.