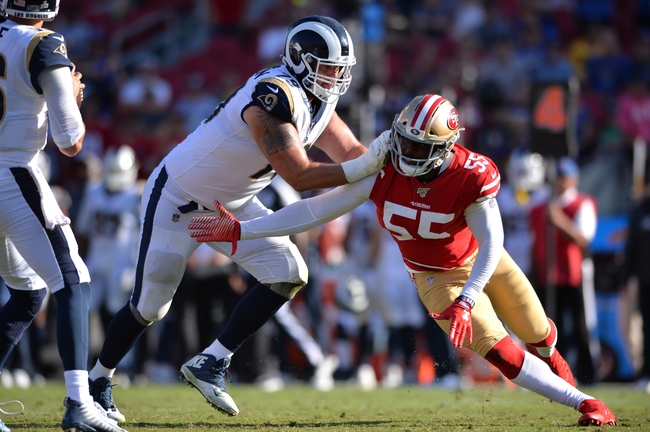 The Los Angeles Rams and the San Francisco 49ers meet in a week 16 NFC West division matchup from Levi’s Stadium on Saturday night.

The Los Angeles Rams will look to rebound after a 44-21 loss to the Dallas Cowboys last time out. Jared Goff threw for 284 yards, 2 touchdowns and an interception on 33 of 51 passing while Todd Gurley II led the Rams in rushing with 20 yards and a touchdown on 11 carries. Tyler Higbee led the Rams in receiving with 12 grabs for 111 yards while Cooper Kupp and Gurley II each had a touchdown reception in the losing effort. Cory Littleton led the Rams with 12 total tackles while Taylor Rapp had 10 total tackles. As a team, Los Angeles is averaging 369.9 yards of total offense and 23.7 points per game while allowing 336.2 yards of total defense and 21.9 points per game against this season.

The San Francisco 49ers will look to rebound after a 29-22 loss to the Atlanta Falcons in their last outing. Jimmy Garoppolo threw for 200 yards and a touchdown on 22 of 34 passing while Raheem Mostert led the 49ers with 54 rushing yards and a touchdown. Tevin Coleman chipped in 40 rushing yards while George Kittle led the Niners with 13 catches for 134 yards and Kyle Juszczyk added a touchdown grab. Defensively, Fred Warner led the 49ers with 9 total tackles while Emmanuel Moseley had 7 solo tackles and Nick Bosa and Sheldon Day each had a sack. As a team, San Francisco is averaging 383.2 yards of total offense and 29.9 points per game while allowing 269 yards of total defense and 18.4 points per game against this season.

I’ve gone back and forth on this game as both teams need the win with San Fran needing a win to make next week’s game against Seattle mean anything while the Rams are trying to keep their playoff hopes alive. Neither of these teams have been anything special lately, as the 49ers have been getting torched in their last couple of games on defense while the Rams were just abused by the Cowboys. In the end, this is still a division game between two teams that don’t like each other and have a ton on the line and I think both teams take a cautious approach as to not be the first to blink and make a mistake. I think this game ends up being decided by a field goal late, so I’ll take a shot with the Rams and the points in this one.