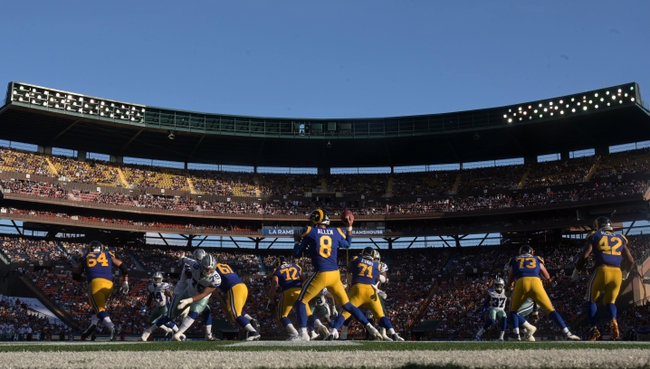 The Los Angeles Rams and the Dallas Cowboys meet in week 15 NFL action from AT&T Stadium on Sunday afternoon.

The Los Angeles Rams will look to keep their momentum going after a 28-12 win over Seattle last time out. Jared Goff threw for 293 yards, 2 touchdowns and 2 picks on 22 of 31 passing while Todd Gurley II rushed for 79 yards and a touchdown and Malcolm Brown added 21 rushing yards and a TD as well. Tyler Higbee led the Rams with 7 grabs for 116 yards while Robert Woods had 7 catches for 98 yards and a TD and Cooper Kupp chipped in 45 yards and a touchdown. Defensively, Troy Hill had an interception and Cory Littleton had a team-high 10 total tackles while Samson Ebukam had 2 sacks and Dante Fowler Jr. and Aaron Donald each had 1.5 sacks. As a team, Los Angeles is averaging 376.2 yards of total offense and 23.9 points per game while allowing 325.5 yards of total defense and 20.2 points per game against this season.

The Dallas Cowboys will be out to snap a three-game losing streak after a 31-24 loss to Chicago last time out. Dak Prescott threw for 334 yards and a touchdown on 27 of 49 passing while Ezekiel Elloitt led Dem Boys in rushing with 81 rushing yards and a pair of touchdowns. Michael Gallup led the Cowboys with 6 grabs for 109 yards and Amari Cooper had 6 catches for 83 yards and a touchdown while Blake Jarwin hauled in 6 balls of his own for 50 yards. Defensively, Jaylon Smith had a fumble recovery and 8 tackles and Jourdan Lewis added an interception while Darian Thompson added 11 total tackles with a team-high 8 solo tackles and a sack. As a team, Dallas is averaging 430.8 yards of total offense and 25.7 points per game while allowing 326.2 yards of total defense and 20.5 points per game against this season.

The points with Dallas as a home dog are tempting given the home field and rest advantage having played on Thursday, but the Cowboys are just getting in their own way in their push for the division title in arguably one of the most lackluster division races in NFL history. Los Angeles suddenly has life again after coasting for much of the season, and I think the Rams take care of business here again to put Dallas on the hot seat and to take another step towards the postseason.