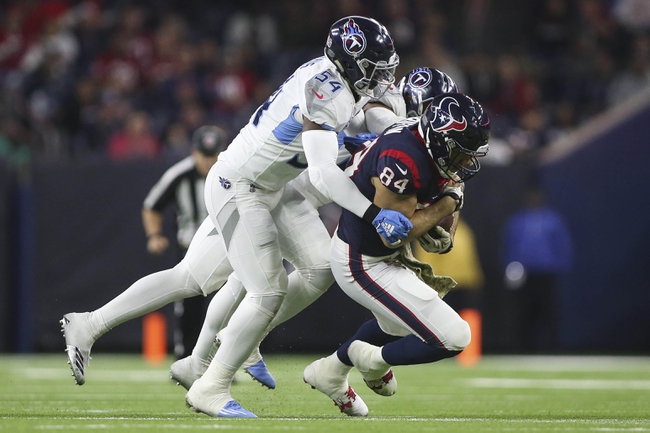 The Houston Texans and the Tennessee Titans meet in week 15 NFL action from Nissan Stadium on Sunday afternoon.

The Houston Texans will look to bounce back after a 38-24 loss to the Denver Broncos in their last outing. Deshaun Watson threw for 292 yards, a touchdown and 2 interceptions on 28 of 50 passing while also rushing for a pair of touchdowns as well. Carlos Hyde led Houston on the ground with 73 rushing yards while DeAndre Hopkins had 7 grabs for 120 yards and a touchdown to lead Houston’s receiving group. Keke Coutee added 5 catches for 68 yards while Jordan Akins had 4 catches for 49 yards and Duke Johnson added 6 catches for 40 yards. Defensively, Zach Cunningham led the Texans with 17 total tackles and 12 solo tackles while Tashaun Gipson Sr. had an interception. As a team, Houston is averaging 376 yards of total offense and 24.4 points per game while allowing 375.3 yards of total defense and 23.8 points per game against this season.

The Tennessee Titans come into this game looking to build on their four-game winning streak after a 42-21 win over Oakland in their last outing. Ryan Tannehill threw for 391 yards, 3 touchdowns and an interception on 21 of 27 passing while Derrick Henry rushed for 103 yards and 2 touchdowns. A.J. Brown led the Titans in receiving with 5 grabs for 153 yards and 2 touchdowns while Jonnu Smith added a TD grab of his own. Defensively, Javon Brown had a fumble recovery that was returned 47 yards late in the 4th four a TD while Logan Ryan had a team-high 9 total tackles. As a team, Tennessee is averaging 346.8 yards of total offense and 24.5 points per game while allowing 361.5 yards of total defense and 19.6 points per game against this season.

I expect both teams to be up for this one as this game could very well decide who wins the AFC South. However, as good the Texans are, there’s simply no denying what Tennessee has put together, completely turning their season around after a 2-4 start, and a lot of that has to do with Ryan Tannehill taking the reins at QB for the Titans. Houston’s playing well in their own right, but that loss to Denver dealt a blow to my confidence in the Texans and Tennessee has opened some eyes during this winning streak, with back-to-back road wins and a win at home over a really good Chiefs team. I think the Titans keep their momentum going with a key win here, covering the number in the process.