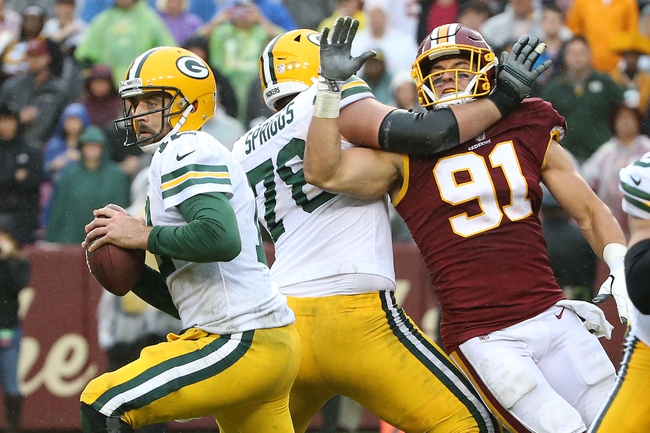 The Washington Redskins and the Green Bay Packers meet in week 14 NFL action from Lambeau Field on Sunday afternoon.

The Washington Redskins come into this one looking to build on back-to-back wins after a 29-21 win over the Carolina Panthers in their last outing. Dwayne Haskins threw for 147 yards on 13 of 25 passing while Derrius Guice rushed for 129 yards and 2 touchdowns on 10 carries and Adrian Peterson added 99 rushing yards and a touchdown on 13 carries. Kelvin Harmon led Washington with 3 catches for 51 yards while Jeremy Sprinkle had 36 receiving yards and Steven Sims Jr. had 3 catches. Defensively, Fabian Morau had an interception and Nate Orchard recovered a fumble while Chris Odom and Matt Ioannidis each had 2 sacks and Montez Sweat added 1.5 sacks as well. Landon Collins led the Redskins with 8 total tackles as well in the victory for Washington. As a team, Washington is averaging 14.4 points and 262.4 yards of total offense while allowing 24.2 points per game against and 361.4 yards of total defense per game this season.

The Green Bay Packers will be looking to build on a 31-13 win over the New York Giants in their last outing. Aaron Rodgers threw for 243 yards and 4 touchdowns on 21 of 33 passing while Jamaal Williams led the Packers in rushing with 41 rushing yards. Allen Laxard led Green Bay with 102 receiving yards and a touchdown while Davante Adams added a team-high 6 catches for 64 yards and 2 touchdowns. Marcedes Lewis also had a touchdown grab. Defensively, Darnell Savage, Kevin King and Tramon Williams each had an interception while Blake Martinez had a team-high 10 total tackles including 7 solo tackles. As a team, Green Bay is averaging 24.1 points and 340 yards of total offense while allowing 21.3 points and 376.8 yards of total defense against this season.

The points with Washington are tempting after back-to-back wins, including their win against Carolina last week as a 10.5-point underdog. However, Detroit and Carolina are both struggling and have major QB issues right now. Green Bay is still in the hunt for one of the two first round byes and could even get home field with some help. I just think that Green Bay needs this game and since they’re the only team with something to play for, I’ll lay the points with Green Bay here.