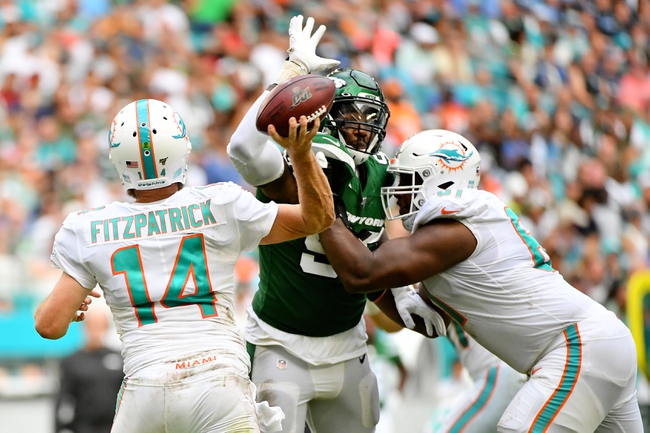 The Miami Dolphins look for another win after winning three of their last five games. The Miami Dolphins have lost four of their last five road games. Ryan Fitzpatrick is completing 62.8 percent of his passes for 2,266 yards, 13 touchdowns and 11 interceptions. Josh Rosen and Fitzpatrick has have combined for 14 touchdowns and 16 interceptions this season. DeVante Parker and Preston Williams have combined for 1,282 receiving yards and nine touchdowns while Mike Gesicki has 36 receptions. The Miami Dolphins ground game is averaging 62.8 yards per contest, and Mark Walton leads the way with 201 yards on 53 carries. Defensively, Miami is allowing 31.4 points and 399.7 yards per game. Jerome Baker leads the Miami Dolphins with 86 tackles, Taco Charlton has five sacks and Bobby McCain has two interceptions.

The New York Jets look for a win after splitting their last eight games. The New York Jets have won three of their last four home games. Sam Darnold is completing 63 percent of his passes for 2,154 yards, 13 touchdowns and 10 interceptions. Darnold has 15 touchdown passes in his last 11 games. Jamison Crowder and Robby Anderson have combined for 1,124 receiving yards and six touchdowns while Demaryius Thomas has 34 receptions. The New York Jets ground game is averaging 72.6 yards per contest, and Le’Veon Bell leads the way with 589 yards and three touchdowns. Defensively, New York is allowing 23.3 points and 317.4 yards per game. Jamal Adams leads the New York Jets with 64 tackles, Jordan Jenkins has five sacks and Neville Hewitt has two interceptions.