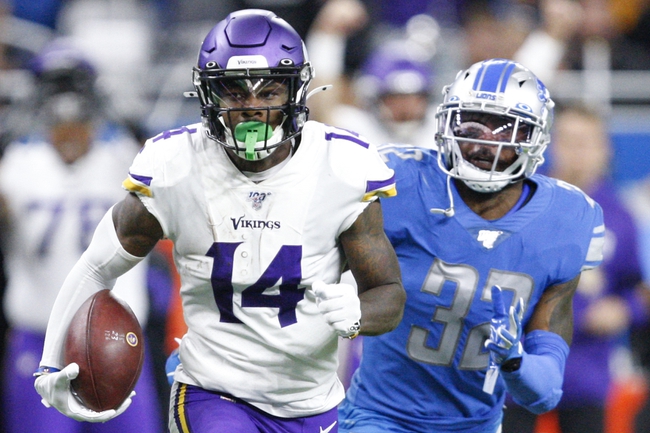 The Detroit Lions need a win here to snap a five-game losing streak. The Detroit Lions have lost four straight road games. Matthew Stafford is completing 64.3 percent of his passes for 2,499 yards, 19 touchdowns and five interceptions. Stafford has two or more touchdown passes in eight of his last 16 games. Kenny Golladay and Marvin Jones Jr. have combined for 1,691 receiving yards and 18 touchdowns while Danny Amendola has 45 receptions. The Detroit Lions ground game is averaging 105.6 yards per contest, and Kerryon Johnson leads the way with 308 yards and two touchdowns. Defensively, Detroit is allowing 26.3 points and 398.1 yards per game. Tracy Walker leads the Detroit Lions with 69 tackles, Devon Kennard has six sacks and Darius Slay has two interceptions.

The Detroit Lions are 3-3 ATS in their last six games as a double-digit underdog. The Minnesota Vikings are 0-4-1 ATS in their last five games as a double-digit favorite. The Detroit Lions aren't winning games, but six of their last seven losses have been decided by eight or less points, so they're hanging around despite an inconsistent defense and constant quarterback changes. The Minnesota Vikings are coming off a frustrating loss to the Seattle Seahawks, and you have to go back to week 7 (against these Lions) the last time the Vikings won a game by more than 10 points. The Lions have had extra time to prepare for this game after playing on Thanksgiving and the Vikings have a short week. I'll take my chances with the two free touchdowns.