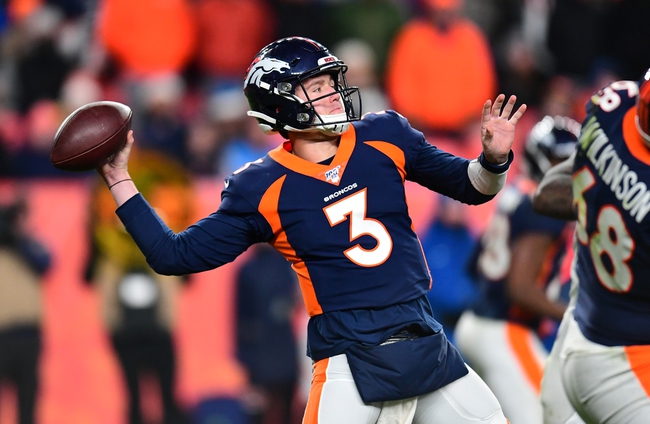 The Denver Broncos and the Houston Texans meet in week 14 NFL action from NRG Stadium on Sunday afternoon.

The Denver Broncos will look for another confidence win after a 23-20 win over the Chargers in their last outing. Drew Lock threw for 134 yards, 2 touchdowns and an interception on 18 of 28 passing while Phillip Lindsay led the Broncos with 58 rushing yards on 17 carries. Courtland Sutton led Denver with 4 grabs for 74 yards and a pair of touchdowns. Defensively, Josey Jewell had a fumble recovery and Dre’Mont Jones added an interception while Derek Wolfe had a pair of sacks and Todd Davis led the Broncos with a team-high 10 total tackles. As a team, Denver is averaging 297.3 yards of total offense and 16.5 points per game while allowing 324.2 yards of total defense and 19.8 points per game against this season.

The Houston Texans will look to build on back-to-back wins after a 28-22 win over New England in their last outing. Deshaun Watson threw for 234 yards and 3 touchdowns on 18 of 25 passing while DeAndre Hopkins added a touchdown pass as well. Duke Johnson led the Texans with 36 rushing yards while the aforementioned Hopkins had a team-high 5 catches for 64 yards. Kenny Stills had 3 grabs for 61 yards and a TD and Duke Johnson had 5 catches for 54 yards and a score while Darren Fells and Deshaun Watson each had a TD grab. Defensively, Bradley Roby had an interception while Benardrick McKinney, D.J. Reader and Zach Cunningham each had a team-high 7 total tackles while Jacob Martin had 1.5 sacks in the win. As a team, Houston 372.8 yards of total offense and 24.4 points per game while allowing 374 yards of total defense and 22.6 points per game against this season.

I get Houston being favored here as they’re at home, are the better team, and are the only team going anywhere come playoff time most likely. However, this feels like a prime letdown spot for Houston after a pair of massive wins, one over Indianapolis and another over a solid New England team, going against a Denver team with nothing really to lose. The Broncos are still a decent team on defense and play the kind of hard-hitting, physical football that makes points come at a premium. I like the value of the free points with Denver here.