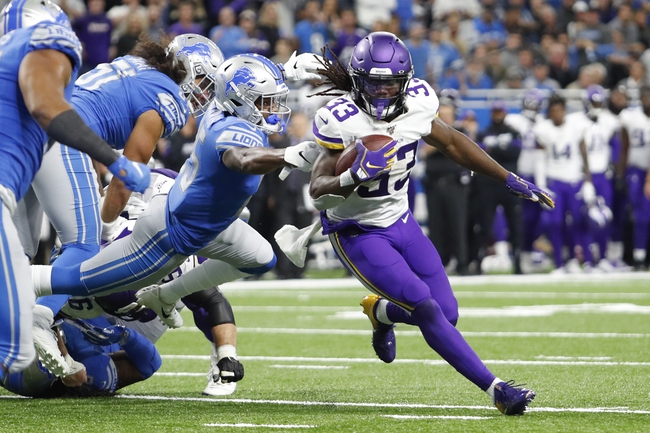 The Detroit Lions and the Minnesota Vikings meet in a week 14 NFC North division matchup in NFL action from U.S. Bank Stadium on Sunday afternoon.

The Detroit Lions will be out to snap a five-game losing streak after a 24-20 loss to Chicago in their last outing. David Blough threw for 280 yards, 2 touchdowns and an interception on 22 of 38 passing while Bo Scarbrough rushed for 83 yards on 21 carries. Kenny Golladay led the Lions with 158 receiving yards and a touchdown while Marvin Jones Jr. had 40 yards and a touchdown and T.J. Hockenson had a team-high 6 catches for 18 yards. Defensively, Darius Slay had an interception and Amani Oruwariye and Tracy Walker each had a team-high 7 total tackles with Oruwariye logging 7 solo tackles. As a team, Detroit is averaging 23.3 points and 377.3 yards of total offense while allowing 26.3 points and 398.1 yards of total defense this season.

The Minnesota Vikings will look to bounce back after a 37-30 loss to Seattle in their last outing. Kirk Cousins threw for 276 yards, 2 touchdowns and an interception on 22 of 38 passing while Dalvin Cook had 29 rushing yards and a touchdown. Laquon Treadwell’s lone catch gave him a team-high 58 yards and a touchdown while Alexander Mattison had 4 catches for 51 yards and Kyle Rudolph had 4 grabs for 50 yards and a TD. Defensively, Mackensie Alexander had a fumble recovery and Anthony Harris logged an interception while Anthony Barr had a team-high 11 total tackles including 7 solo tackles. As a team, Minnesota is averaging 26.6 points and 376.6 yards of total offense while allowing 20.2 points and 347.4 yards of total defense per game this season.

Detroit and almost two touchdowns is tempting, but David Blough had the luxury of his first start being at home and in Minnesota is far from an enviable spot for his follow-up start if he gets the nod here. Minnesota is a much better team at home than on the road and I just don’t like Detroit’s chances in this spot. I’ll lay the points with Minnesota here.