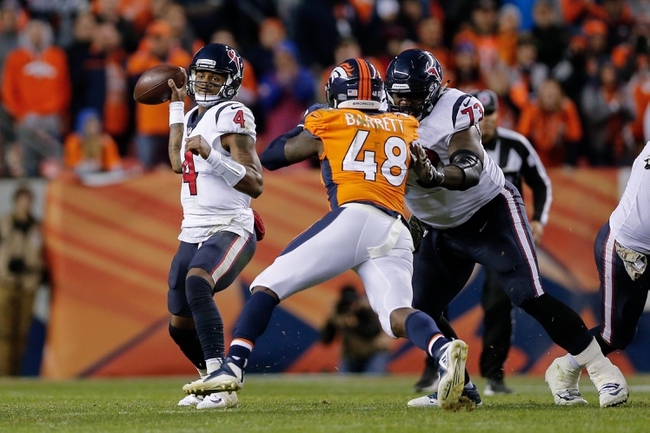 The Houston Texans look to stay hot after winning six of their last eight games. The Houston Texans have won their last four home games. Deshaun Watson is completing 69.2 percent of his passes for 3,133 yards, 23 touchdowns and seven interceptions. Watson has two or more touchdown passes in 13 of his last 21 games. DeAndre Hopkins and Will Fuller V have combined for 1,501 receiving yards and nine touchdowns while Kenny Stills has 30 receptions. The Houston Texans ground game is averaging 129.8 yards per contest, and Carlos Hyde leads the way with 853 yards and four touchdowns. Defensively, Houston is allowing 22.6 points and 374 yards per game. Zach Cunningham leads the Houston Texans with 102 tackles, Whitney Mercilus has 5.5 sacks and Tashaun Gipson has two interceptions.

The Denver Broncos find ways to compete and hang around in games they probably shouldn't, but their quarterback situation isn't good and there's way too much pressure on the defense to play at a high level. The Houston Texans are in a letdown spot after beating the New England Patriots last week, but they're led by a quarterback who is beyond his years and I doubt they fall into the trap. I'm not looking to step in front of these Houston Texans and I don't trust inexperienced quarterbacks on the road. The Texans should cruise in this game.