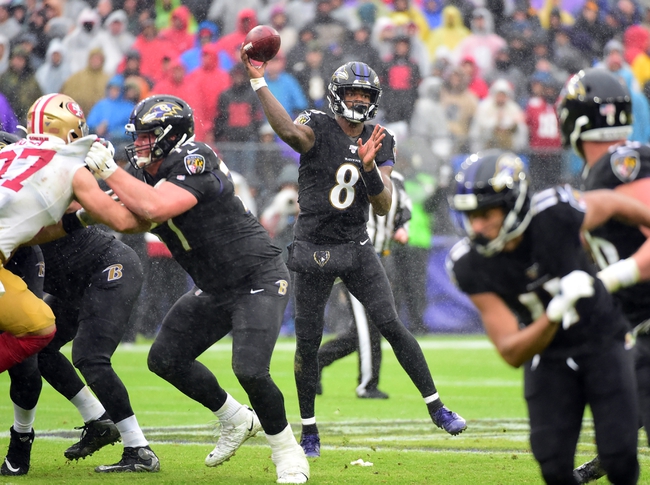 The Baltimore Ravens and the Buffalo Bills meet in week 14 NFL action from New Era Field on Sunday afternoon.

The Baltimore Ravens will look to build on their eight-game winning streak after a 20-17 win over San Francisco in their last outing. Lamar Jackson threw for 105 yards and a touchdown on 14 of 23 passing while also leading the Ravens with 101 yards and a touchdown on 16 carries. Mark Ingram II added 59 rushing yards while Mark Andrew led the Ravens in receiving with 3 catches for 50 yards and a touchdown. Defensively, Marlon Humphrey and Chuck Clark each had a team-high 7 total tackles with Humphrey logging all 7 as solo tackles with Clark logging a sack while Brandon Williams had a fumble recovery. As a team, Baltimore is averaging the highest-scoring offense in the league with 33.8 points per game and 420.8 yards of total offense while allowing 18.3 points and 323.4 yards of total defense per game this season.

The Buffalo Bills will look for a big home win to add to their current three game winning streak after a 26-15 win over Dallas on Thanksgiving. Josh Allen threw for 231 yards and a touchdown on 19 of 24 passing while John Brown threw for a 28-yard TD as well. Devin Singletary led the Bills in rushing with 63 yards on 14 carries while Josh Allen had 43 rushing yards and a touchdown. Cole Beasley led the Bills in receiving with 6 catches for 110 yards and a touchdown while Singletary had a touchdown reception of his own. Defensively, Star Lotulelei had an interception and Trent Murphy had a fumble recovery while Micah Hyde led Buffalo with 10 total tackles and Ed Oliver had a pair of sacks. As a team, Buffalo is averaging 21.4 points per game and 353 yards of total offense while allowing 15.7 points and 300.1 yards of total defense per game this season.

I considered taking the Bills and the points considering that Baltimore could be in for a letdown after such a big win over a solid 49ers team to take over the top spot in the AFC. A Buffalo win combined with a very possible Patriots’ loss to Kansas City would also see the Bills tie the Patriots atop the AFC East, possibly making that week 16 matchup quite interesting. However, there’s not much of a dropoff in skill between the 49ers and the Bills for this to be a traditional letdown spot, and I just can’t get myself to go against the Ravens with the way the offense has been producing lately. This should be a great game, but I see the Ravens winning this one by a touchdown so I’ll lay the points with Baltimore here.