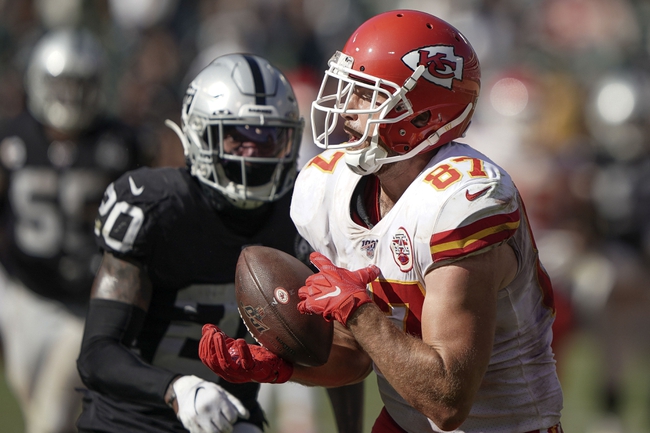 The Oakland Raiders and the Kansas City Chiefs meet in an AFC West division matchup in NFL action from Arrowhead Stadium on Sunday afternoon.

The Oakland Raiders will look to bounce back after a humbling 34-3 loss to the New York Jets in their last outing. Derek Carr threw for 127 yards and an interception on 15 of 27 passing while Mike Glennon had 20 yards on 4 of 7 through the air. Josh Jacobs led Oakland with 34 rushing yards on 10 carries while Jalen Richard led the Raiders in receiving with 6 catches for 47 yards. Darren Waller added 3 grabs for 41 yards and Hunter Renfrow added 3 catches of his own for 31 yards. Defensively, Nicholas Morrow led the Raiders with 10 total tackles, including 5 solo tackles in the losing effort. As a team, Oakland is averaging 356.8 yards of total offense and 20.7 points per game while allowing 372.8 yards of total defense and 25.8 points per game against this season.

The Kansas City Chiefs will try to find some consistency after alternating wins and losses in each of their last 6 games following a 24-17 win over the Los Angeles Chargers last time out. Patrick Mahomes threw for 182 yards, a touchdown and an interception on 19 of 32 passing while leading the Chiefs in rushing as well with 59 rushing yards. Darrel Williams had 35 rushing yards and LeSean McCoy added 29 rushing yards with each logging a rushing TD while Travis Kelce had 7 catches for 92 yards and a touchdown. Defensively, Anthony Hitchens led KC with 10 total tackles while Tyrann Mathieu, Daniel Sorensen, Derrick Nnadi and Rashad Fenton each had an interception in the winning effort. As a team, Kansas City is averaging 396.1 yards of total offense and 28 points per game while allowing 375.7 yards of total defense and 23.3 points per game against this season.

I get Kansas City being favored at home, and laying the points is something to consider after Oakland’s stinker last week. However, Oakland needs this game just as much as the Chiefs do, as a two game deficit in the division with four games to go would be really hard for Oakland to make up. Kansas City hasn’t been very good at stopping the run either, so I’d look for Josh Jacobs to have a solid game for the Raiders here. I’m not saying the Raiders win outright, but I think Oakland definitely puts their best foot forward, so I’ll take the Raiders and the points here.