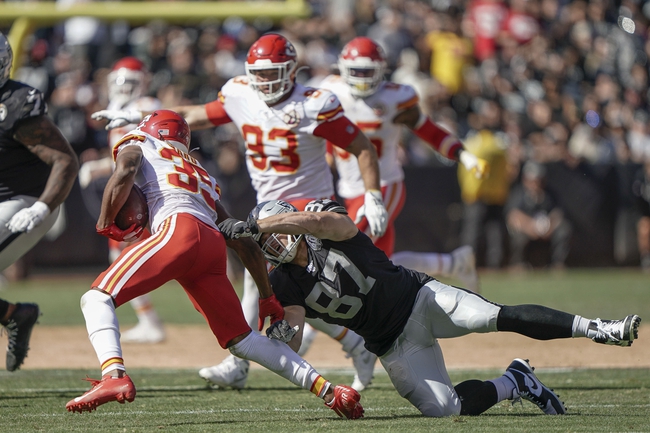 The Oakland Raiders need a victory here after splitting their last 10 games. The Oakland Raiders have lost three straight road games. Derek Carr is completing 70.9 percent of his passes for 2,621 yards, 15 touchdowns and six interceptions. Carr has one or less touchdown passes in 10 of his last 17 games. Darren Waller and Tyrell Williams have combined for 1,187 receiving yards and eight touchdowns while Hunter Renfrow has 36 receptions. The Oakland Raiders ground game is averaging 122.7 yards per contest, and Josh Jacobs leads the way with 957 yards and seven touchdowns. Defensively, Oakland is allowing 25.8 points and 371.1 yards per game. Tahir Whitehead leads the Oakland Raiders with 80 tackles, Maxx Crosby has 7.5 sacks and Erik Harris has three interceptions.

The Oakland Raiders are 3-5 ATS in their last eight games as a double-digit underdog. The Kansas City Chiefs are 2-6 ATS in their last eight games as a double-digit favorite. Just when it looked like the Oakland Raiders were a team to keep an eye on, they lose by 31 points to the garbage New York Jets. The Kansas City Chiefs have had an extra week to prepare for this game and kind of get things back on track after some shaky recent play on both sides of the ball. AFC West games can be weird and tight, but I'll take a rest Chiefs team and Andy Reid over what the Raiders showed last week. The Kansas City Chiefs could look like last years club in this game and produce a beatdown victory.