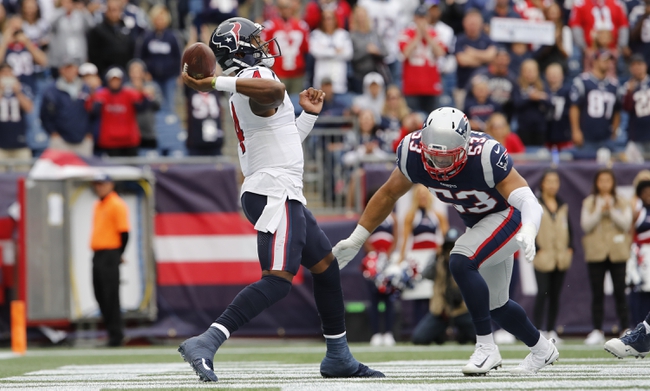 The Houston Texans look for a statement win after winning five of their last seven games. The Houston Texans have won their last three home games. Deshaun Watson is completing 69 percent of his passes for 2,899 yards, 20 touchdowns and seven interceptions. Watson has two or more touchdown passes in 12 of his last 20 games. DeAndre Hopkins and Will Fuller V have combined for 1,429 receiving yards and nine touchdowns while Kenny Stills has 27 receptions. The Houston Texans ground game is averaging 136.9 yards per contest, and Carlos Hyde leads the way with 836 yards and four touchdowns. Defensively, Houston is allowing 22.6 points and 367.3 yards per game. Zach Cunningham leads the Houston Texans with 95 tackles, Whitney Mercilus has 5.5 sacks and Tashaun Gipson has two interceptions.

The New England Patriots are 5-5 ATS in their last 10 games as a road favorite. The Houston Texans are 2-6 ATS in their last eight games as a home underdog. The New England Patriots are finding ways to win games, but these games have been tight and it seems like Brady is being less effective by the week. The Houston Texans have had extra time to prepare for this game and their offense is about as healthy as it's been all season. The New England Patriots don't look as scary as they once did and we know Watson thrives in these big moments with the spotlight on him. I'll take the free field goal, but I wouldn't be surprised if the Texans won this game outright.