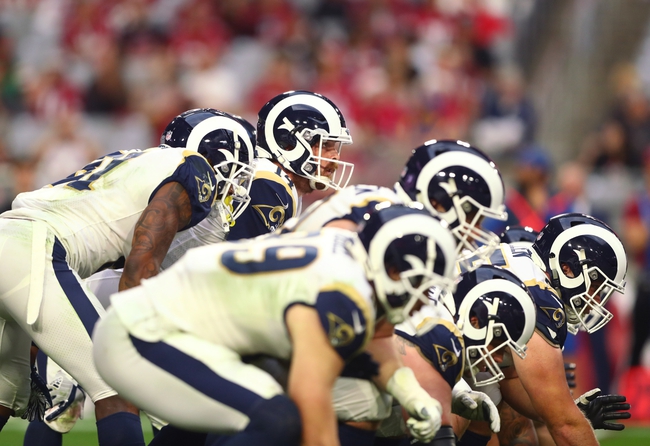 The Los Angeles Rams and the Arizona Cardinals meet in a week 13 NFC West division matchup in NFL action from State Farm Stadium on Sunday afternoon.

The Los Angeles Rams will look to rebound after being pumped by Baltimore on Monday night football by a final score of 45-6 last time out. Jared Goff threw for 212 yards and 2 interceptions on 26 of 37 passing while Todd Gurley II led the Rams in rushing with 22 rushing yards. Robert Woods led L.A.’s receiving group with 6 catches for 97 yards while Cooper Kupp had 6 catches of his own. Defensively, Cory Littleton led the Rams with 12 total tackles while Taylor Rapp had 10 total tackles and Samson Ebukam added 1.5 sacks in the losing effort. As a team, Los Angeles is averaging 353.3 yards of total offense and 22.6 points per game while allowing 338.7 yards of total defense and 22.1 points per game against this season.

The Arizona Cardinals will be out to snap a four game losing streak after a 36-26 loss to the San Francisco 49ers in their last outing. Kyler Murray threw for 150 yards and 2 touchdowns on 24 of 33 passing while also rushing for a team-high 67 yards and a touchdown. Kenyan Drake added 67 rushing yards while Christian Kirk had a team-high 6 grabs for 41 yards. Larry Fitzgerald and Pharoh Cooper each had a touchdown reception for the Cardinals in the losing effort. Defensively, Budda Baker led the Cards with 13 total tackles including a team-high 12 solo tackles while Jordan Hicks added 12 total tackles of his own as well as an interception. Jalen Thompson also added an interception of his own in the losing effort. As a team, Arizona is averaging 343.9 yards of total offense and 22.5 points per game while allowing 415.2 yards of total defense and 28.8 points per game against this season.

I think you can make a case for either side here, as Los Angeles will look to make amends after getting absolutely destroyed in primetime on Monday night, while Arizona catches the Rams on a short week and have shown flashes of capability offensively. Instead, I’m going to side with the over. I can definitely see this game finishing in the area of 27-24 or 28-24 as both teams will find the opposing end zone quite a bit here. Both defenses have also been shaky lately, so I’ll expect a high-scoring affair in this one.