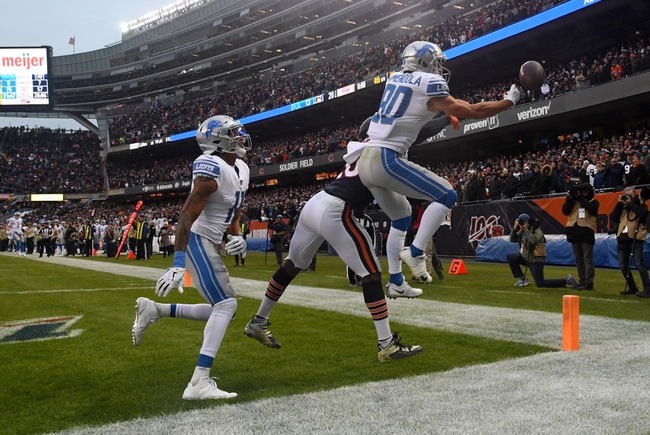 The Chicago Bears and the Detroit Lions meet in the afternoon game on Thanksgiving Day from Ford Field in week 13 NFL action.

The Chicago Bears will look for another win to get back to .500 after improving to 5-6 with a 19-14 win over the New York Giants in their last outing. Mitch Trubisky threw for 278 yards, a touchdown and 2 interceptions on 25 of 41 passing while also rushing for a touchdown as well. Tarik Cohen and David Montgomery combined for rush for 47 yards on 19 carries while Allen Robinson II had a team-high 131 receiving yards and a touchdown on 6 catches. Anthony Miller also had 6 catches for 77 yards while the aforementioned Cohen had 7 catches. Defensively, Nick Williams recorded a fumble recovery while Ha Ha Clinton-Dix led the Bears with 7 total tackles. As a team, Chicago is averaging 269.3 yards of total offense and 17.1 points per game while allowing 315.6 yards of total defense and 17.1 points per game against this season.

The Detroit Lions could use a win after losing four straight and seven of their last eight games following a 19-16 loss to Washington in their last outing. Jeff Driskel threw for 207 yards, a touchdown and 3 interceptions on 20 of 33 passing while also rushing for 63 yards. Bo Scarbrough led the Lions on the ground with 98 rushing yards while Kenny Golladay led the Lions in receiving with 61 yards. Marvin Jones Jr. had a team-high 5 catches for 46 yards while Logan Thomas had a touchdown grab. Defensively, Tavon Wilson recovered a fumble while Amani Oruwariye had an interception. Wilson also shared the team-high with Jarrad Davis with 8 total tackles in the losing effort. As a team, Detroit is averaging 378.5 yards of total offense and 23.6 points per game while allowing 396.2 yards of total defense and 26.5 points per game against this season.

I’m not the biggest supporter of the Bears I’ll admit, but there’s no way in heck I’m siding with the Lions right now with Driskel under center. The Lions have remained competitive for the most part, but if we’re being honest, last week was a winnable game against Washington and Driskel just couldn’t get the job done. Say what you want about Trubisky and the Bears, but they’re the much healthier team here and are still fighting for an outside chance at a playoff spot which is more than we can say for the Lions. I’ll lay the points with Chicago on the road in this one.